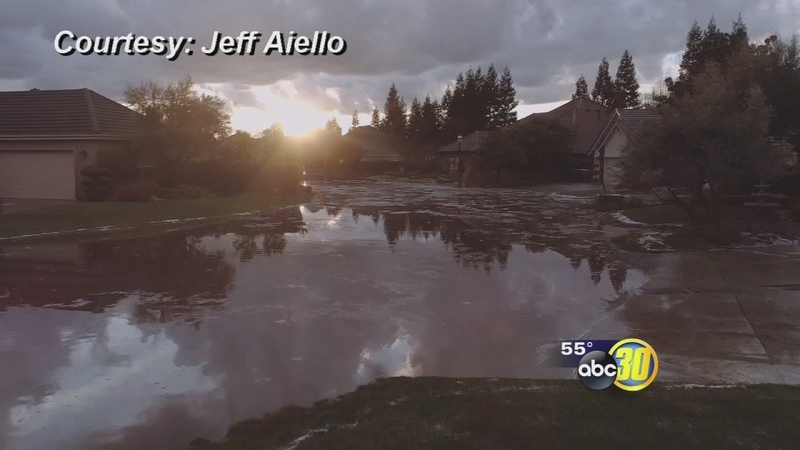 FRESNO, Calif. (KFSN) -- You could see the fury of Friday's storm long after it passed; forcing people on top of their sunroofs and others into knee deep water.

A Dodge Challenger was one of several that underestimated the current. The engine stalled and Malik Alqatami, who was supposed to be on a fast food run, ended up with soggy burgers and fries.

"The water started coming inside the car, and we used a cup to take it out, we threw like 50 cups outside."

The city said the drains weren't at fault, the water was just too much to handle. Cars that sped through high waters didn't do themselves any favors.

Kylee Perkins, who helped pull cars out, said, "Some of them should have just driven around it, instead of trying to drive through it."

All across Northeast Fresno tow trucks were backed up with so many calls that neighbors like Jeff Montague and a few girls had to step in to help.

"Some girls were kind of screaming because the water was coming up into their car, so we tried to get them out sooner."

But the waters were merciless and as Montague tried pulling Alqatami's Challenger out his front tire fell in.

"All the water trying to drain out pushed up a manhole, we actually got stuck so I didn't know what it was the whole truck sunk down."

Standing wet and cold next to a stalled car Alqatami said sometimes lessons are learned the hard way.

"I thought we could drive through it, but it was really deep, and it didn't even look that deep honestly."

Near Temperance and Nees Avenues in Northeast Fresno, Jeff Aiello watched as drivers were left stranded by a sudden downpour.

"Boom, it just came down and it hammered us for about 45 minutes," he said. "As hard as you can ever imagine, it raining mixed with hail."

Not far from Aiello, along Harlan Ranch Boulevard, people were using the sidewalk to avoid a situation like flooding. In northwest Fresno, it was the same story for neighbors like Kevin Manning.

"We're just out here pulling cars out," he said. "What do you know? If we were stuck, we'd need help so let's just help out right?"

Manning lives near Herndon and Milburn Avenues where storm drains were overloaded with water and clogged with debris - knowing that even in a drought-stricken city, storms and flash floods should never be taken lightly.

"I came out and this young man is sitting on top of his car eating his lunch and talking on the phone and he was stalled," neighbor Lynn Psaltis said.

Fresno police said they anticipated this would actually happen and placed all of their towing contractors on standby. Even so, a lot of these businesses were overwhelmed by calls. City crews in both Fresno and Clovis worked quickly to clear the drainage systems, but they aren't designed to take in so much rain in a short amount of time.

"The drainage system is working it just takes a while to drain," Brian Russell with Fresno Public Works said.

Now that most of the flooding has receded, all that's left are muddy sidewalks and dirty lawns - a sign of a storm that's left its mark.