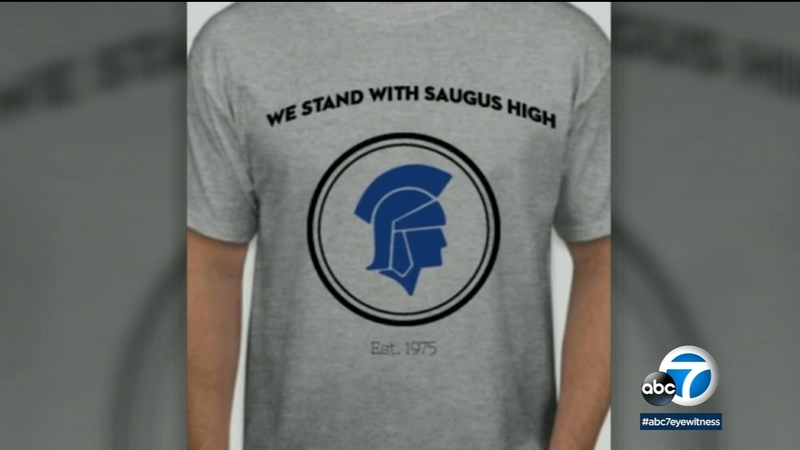 SANTA CLARITA, Calif. -- As the community of Santa Clarita continues to mourn the deaths of two teenage students killed in a shooting at Saugus High School, one local family has taken on a project in the hopes of creating a path toward recovery.

Seventeen-year-old Ashley Sontos wanted to transform her agony into action so she decided to create t-shirts with a unifying symbol and message to strengthen the entire community.

"I didn't think I was allowed to be sad and just do nothing. I feel like I needed to put my efforts into doing something," said Sontos of West Ranch High which was impacted by the district-wide lockdown immediately following the shooting Thursday.

The shirt's design features a blue Centurion, the high school's mascot, topped with a unifying message.

"We landed on 'We Stand with Saugus High' because it felt collective and we weren't going to let something tear our entire community, especially the Saugus community, down."

One-hundred percent of all the proceeds will go to the families of the victims. The Sontos family has already put up $400 for the first batch of t-shirts which can be found online.

In less than 24 hours, 55 shirts were sold from as far away as Arizona and Virginia. Sontos says she would like to see people across the nation to show solidarity.

"We shouldn't be pushed down because of terror or anything like that. We need to live so people can just not be afraid to go to school anymore."

On Monday, students at West Ranch High will be wearing Centurion blue in a show of solidarity with Saugus High School.

Meanwhile, a makeshift memorial continued to grow at Central Park, just down the street from the school. Piles of flowers, notes and balloons could be seen left behind for the two innocent lives lost. A group of therapy dogs were at the park to held mourners. A massive "Saugus Strong" vigil at the park was planned for Sunday night with thousands expected to turn out.

A makeshift memorial continued to grow at Central Park, just down the street from Saugus High School. Piles of flowers, notes and balloons could be seen left behind for the two innocent lives lost.