Firefighter struck by tree and killed while battling Ferguson Fire 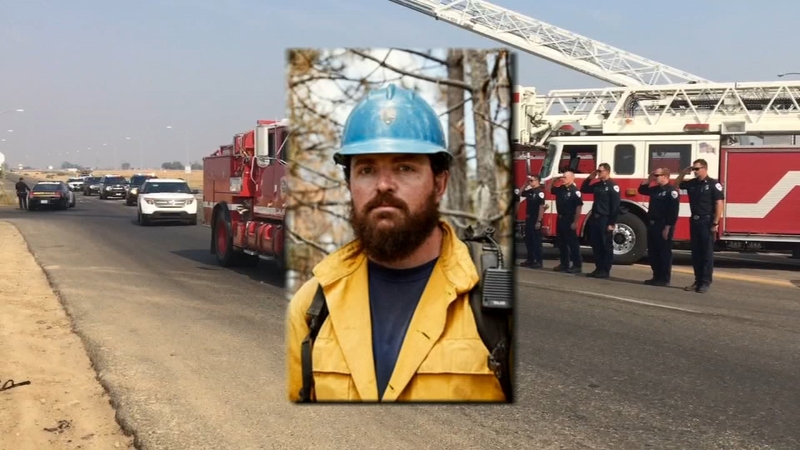 Firefighter struck by tree and killed while battling Ferguson Fire

FRESNO, Calif. (KFSN) -- Firefighter Brian Hughes, 33, from Sequoia and Kings Canyon National Parks was killed in the line of duty at the Ferguson Fire, Sunday morning.

He was a captain of the Arrowhead Interagency Hotshots.

The firefighter and his crew were engaged in a tactical firing operation on the east side of the Ferguson Fire.

They were operating in an area with a large amount of tree mortality. The firefighter was struck by a tree. He was treated at the scene but passed away before he could be transported to a hospital.

This another devastating loss for the fire service. It was just 16 days ago from the death of Cal Fire heavy equipment operator Braden Varney.

"As soon as I heard, I felt like crying. I still feel like crying. This is just so sad to lose our young people fighting these fires," said Mariposa resident Georgia Gallagher.

Gallagher is one of the hundreds that, at a moment's notice, lined the highway of the town of Mariposa to pay her final respects.

"They're fighting for our homes and it's important to support them in every way we can," said Gallagher.

The procession took Hughes' body from the Mariposa airport to the Stanislaus County coroner's office.

"Showing support for the firefighters who are risking their lives to save our lives and our property it's the least we can do to show our respect," said Mariposa resident Tracy Dedore.
According to the national parks service, it was Sunday morning when the accident happened.

They say Hughes and his crew were conducting a tactical firing operation on the east side of the Ferguson fire.

"The area he was in was full of standing dead trees which a lot of this forest has or the fire area has," said Ferguson Fire PIO Jacob Welch.

Hughes was struck by a tree he was treated on scene but died before he could make it to the hospital.

"You know it's tough for us we know we have a job and we have to stay focused and get this fire contained," said Welsh.

In addition to the two fatalities, the Ferguson Fire has injured seven firefighters.