KFSN
By Brian Johnson
TULARE COUNTY (KFSN) -- Tulare County Sheriff Mike Boudreaux confirms the Pier Fire started when someone set a stolen car on fire, and pushed it over the side of a cliff on Highway 190. Fire officials say the cause is still under investigation.

Crews working the fire feel the community's love every time they leave the command post in Porterville.

Lee Qualls is grateful for their work, and plans to pray with them Thursday morning.

"They're doing an awesome job, as far as I know there's been no structures hit yet, and that's awesome," said Lee Qualls, a Porterville painter. "I got a lot of friends that live up there."

There are two briefings at the incident command post every day. Fire Information Officer Steve Kliest says the Porterville Fairgrounds are home base for the majority of the more than 1,500 people working to put it out.

Officials say the Pier Fire, which started in the Tule River Canyon last Tuesday, has cost more than $14 million to fight so far.

The command post is also conveniently located next to the Porterville Air Attack Base.

The fire has burned more than 20,000 acres and is 20 percent contained.
Firefighters on the ground have been working hard to protect homes, but have been dealing with steep terrain, heavy fuel loads, and extreme heat.

"Firefighters have to constantly keep themselves hydrated, drinking plenty of fluids," Kleist said. "Those challenges are at almost every fire we go to, but it's even more so at this fire."

The Mobile Sleeper Company has a handful of units set up at the command post. The units sleep 42 each, and provide comfortable and cool place for firefighters to sleep.

"It gives them a nice night's rest so that they're more refreshed and able to do their jobs and it cuts down on injuries and sleep deprivation," said Kim Michaels, with The Mobile Sleeper Company.

Many residents of Tulare County mountain communities still aren't allowed to sleep in their homes while under a mandatory evacuation order.

Highway 190 also remains closed as the fight against the pier fire continues.

Officials say a Southern California Edison water flume was destroyed in the fire, and the cost to replace it will be $3-million to $5-million.
Report a correction or typo
Related topics:
tulare countywildfiretulare county
Copyright © 2020 KFSN-TV. All Rights Reserved.
TULARE COUNTY 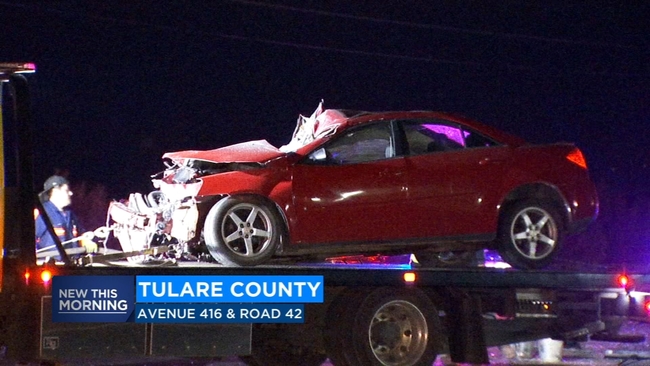