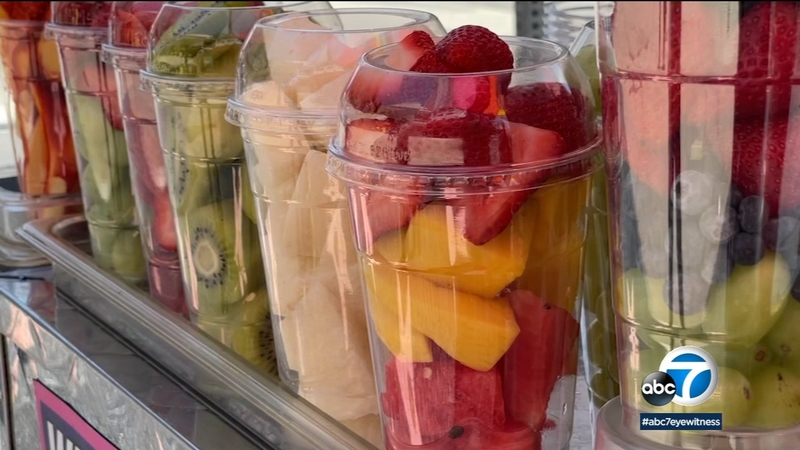 LOS ANGELES -- Southern California is known for its many street food vendors. A new bill moving through the state Legislature would make it easier for them to make a living.

SB 972 would change the food retail code so they're able to get the proper health permits.

Merlin Alvarado works 12-hour days as a food street vendor. It's how she has made a living for 16 years.

Her family in Southern California and her mother in Central America depend on her small business.

If five years ago, someone told her street vending would be legalized in Los Angeles, Alvarado said she would have laughed.

She has been a crucial member of a coalition that helped make that a reality in L.A. and California. Now, she and colleagues are sounding the alarm on the challenges they face to obtain permits from local health departments.

Street vendors watched and recorded as L.A. County Public Health employees threw away their food merchandise because they did not have the correct permits.

"It's very, very expensive for a street food vendor to get their permits and to get the equipment necessary," said Rudy Espinoza, executive director of Inclusive Action.

The cost can be in the tens of thousands of dollars, according to Espinoza and several groups who've researched the hurdles food street vendors face.

The organization and a coalition of groups are advocating for the passage of SB 972, a bill that would modify the California food retail code.

"Currently the retail food code is designed for big restaurants and big food trucks. It was never really designed for the small food carts and fruit carts that we see in our in our streets," said Espinoza.

The bill is authored by Sen. Lena Gonzales (D-CA).

"We've seen an uptick in street food vending, just all throughout the district, especially in places like Cudahy and Maywood in the Southeast L.A. portion of the district and even places like west and central Long Beach," Gonzalez said.

Among other things, the bill would eliminate some expensive equipment requirements and intentionally incorporate sidewalk food vendors into the code.

"Ensuring that there's an opportunity for them to vend in a way that's safe and still upholds the laws and health and safety guidelines," Gonzalez said. "It also replaces harsh criminal pellet penalties as well with non-criminal administrative fines for code violations, which is really key."

Following several testimonies, including Alvarado's, the bill cleared the Senate Health Committee in April and now heads to the Senate floor.

Alvarado said she may not be a food street vendor 10 years from now. However, she will be able to say she was a part of that change.

"I was there and thanks to those of us who were in the fight during that time, those working today can work legally," she said.