'Kid'-napping ends when baby goat reunited with its mother 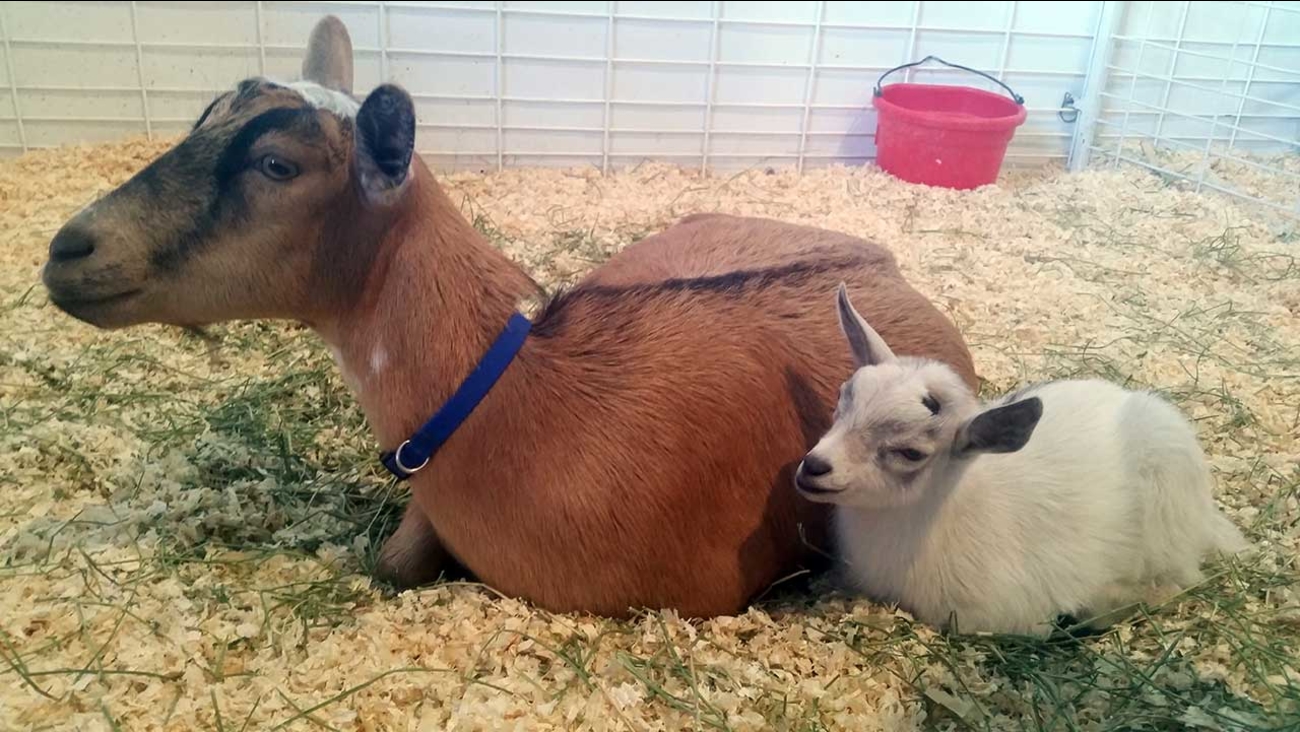 GusGus, right, sits next to his mother, Custard, after they are reunited at the Arizona State Fair in Phoenix, Thursday, Nov. 5, 2015.

PHOENIX -- Like a scene out of a Hollywood tearjerker, a baby pygmy goat that vanished from the Arizona State Fair came home to its mother surrounded by TV cameras and jubilant fairgoers.

Dozens of employees and visitors burst into applause Thursday as GusGus was gently placed in the pen where he was last seen. Several people huddled to watch mother and kid reunite below a "Welcome Home GusGus!" banner and "Welcome Home" balloons.

Fair livestock director Karen Searle said a man walking his dog along a canal in Phoenix found GusGus and took him to a pet store, where an attentive worker reached out to the State Fair.

"They called the fair and sent pictures to our phone," Searle said. "We said 'It's got to be him' and it was him."

GusGus was hungry and tired but not injured. Searle believes someone simply dumped him near the canal and that he couldn't have been out there that long.

Finding him was especially urgent because he cannot survive without his mother's milk. The miniature goat weighs less than 5 pounds and is still nursing.

Born last month, he also has not received all his shots. Fair workers say they wish they could meet the man who found GusGus, but he didn't even leave his name at the pet store.

"From the bottom of our hearts, we'd like to thank him," petting zoo manager Emilie Owen said. "He literally saved GusGus' life by finding him."

Families at the fair who had heard about the missing goat earlier in the day were also in a celebratory mood.

"It's good to know he's OK. He's so little," said Megan Zimbelman, who was there with her high school classmates.

Someone took tiny GusGus from his pen Wednesday evening. The kidnapping sparked disbelief and legions of followers on social media who helped make the missing animal a hot topic. His disappearance sparked the hashtag, #FindGusGus.

"In over 30 years that we've been doing this, I have never had anything like this happen," Owen said.

The images of the mother, Custard, crying for her missing kid helped bring even more attention to the story. According to petting zoo workers, Custard was calling out for her baby.

Searle said there are employees in the petting zoo at all times. So someone would have noticed if GusGus had tried to run off. Because he is tame and accustomed to humans, he would not have cried out if someone picked him up.

"This was definitely an intentional theft. There's no way it was an accident," Searle said.

GusGus and Custard are part of a menagerie of animals provided by the Oregon-based Great American Animal Entertainment Company, which brings petting zoos to events around the country. The makeshift barn that houses the petting zoo at the Arizona State Fair has no surveillance cameras. Owen said it saddens her that now they have to change security around the petting zoo.

"Probably we'll have someone stationed at the exit gate from now on, checking people to make sure nobody is leaving that isn't supposed to be," Owen said.
Related topics:
societyarizonagoattheftu.s. & worldgood news
Copyright © 2021 by The Associated Press. All Rights Reserved.
U.S. & WORLD