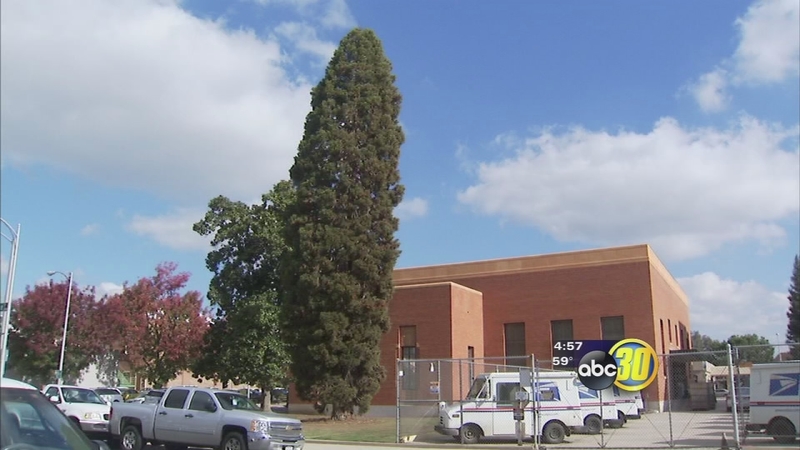 VISALIA, Calif. (KFSN) -- A 65-foot tall tree sits blending in with the scenery around it. Now, South Valley officials are hoping that a nearly 80-year-old giant sequoia will stand out and eventually become a tourist destination in the South Valley.

"We think that the historical factor of this tree is a really important part of Visalia. It was a collaboration between the national parks and the US Postal Service 80 years ago to plant these trees," said Suzanne Bianco, Visalia Convention and Visitors Bureau.

The tree-- planted next to Visalia's downtown post office in 1936-- was originally part of a two-some. Another giant sequoia was originally planted on the other side of the post office, but it had to be taken down in the 80s because of deterioration. Though the remaining tree has suffered some from the drought officials with the city and Visalia Convention and Visitors Bureau are hoping to help it thrive while providing a history lesson to tourists and people who live here. "We hope that it's an opportunity for some of our children to come and meet with a ranger here. They can talk about the tree itself and the Sequoia National Park and encourage families and children to go and visit the parks," explained Bianco.

They're hoping tourists will visit Sequoia National Park nearby and then enjoy Downtown Visalia. Before that happens, though, Bianco wants to make it look more like a tourist attraction. "We'd like it to look similar to what the park looks like around the General Sherman tree-- the split rail fencing, the wayside displays that offer the information about the tree, about the park, and about Visalia's connection with the park service."