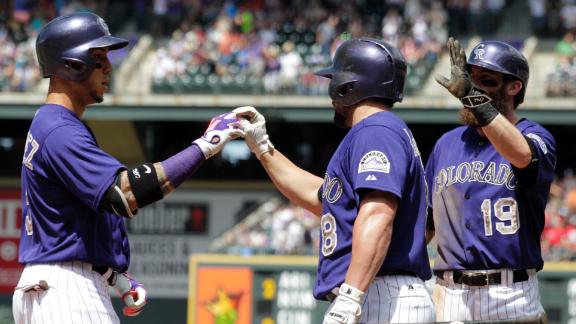 DENVER -- Atlanta Braves reliever Jason Grilli suffered a left Achilles rupture in the bottom of the ninth inning of Saturday's 3-2 loss to the Colorado Rockies,tumbling to the ground as he ran toward first to cover the bag.

The Braves announced the injury after the game, saying the 38-year-old is expected to miss the rest of the season.

Drew Stubbs hit a grounder that first baseman Chris Johnson ranged to his right to field. Grilli was sprinting to cover the bag when he appeared to take a bad step and crumpled to the ground, grabbing his lower left leg in pain. Stubbs was safe on what was ruled a hit.

Team trainers and manager Fredi Gonzalez ran on to the field to tend to Grilli, who remained on the ground for several minutes. He was helped to his feet and taken away on a cart for further treatment.

"The pain he was in on the field was cruel," Gonzalez said.