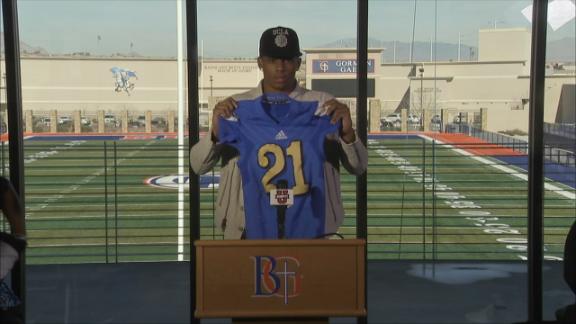 Cordell Broadus, the son of rapper -- and longtime USC fan -- Snoop Dogg, may have what it takes to convert his father's fandom to the Trojans' crosstown rivals.

Broadus, the four-star Under Armour All-American receiver who is ranked 130th in the ESPN 300, committed to play for UCLA on Wednesday.

"I feel that UCLA is the best fit for me," Broadus said during his announcement on ESPNU. "I had the offer since my nine-grade year, so I had a great connection with the coaches. I just want to play in front of my family and keep ballin' out on the field and get a great degree."

His recruitment has been the subject of a five-part documentary series on ESPN called "Snoop & Son: A Dad's Dream."

His father even sported a true blue and gold Bruins jersey during the announcement.

"It's been awesome just watching him step into manhood and make a decision that he's comfortable with," Snoop Dogg said.

He only took an official visit to see the Sun Devils this past fall, but is very familiar with both the UCLA campus and fellow recruits in the Bruins' 2015 class.

Seen as a virtual UCLA lock early in the process, Arizona State came on strong and looked as though it could eventually sign the 6-foot-2, 192-pound receiver. But on a day when UCLA head coach Jim Mora couldn't lose, Broadus settled on the Bruins and gives UCLA an elite receiver.

In his senior season, Broadus caught 39 passes for 602 yards and 11 touchdowns as Bishop Gorman went undefeated and won the Nevada Division I state championship.

Broadus was just another chip in a big day on the recruiting trail for the Bruins.

"I think it'll be great playing with some great athletes and just going out there and playing hard, working hard and winning games," Broadus said.

Erik McKinney of ESPN.com contributed to this report.

No. 14 WR Cordell Broadus Picks UCLA
Under Armour All-American wide receiver Cordell Broadus of Bishop Gorman (Las Vegas) committed to the Bruins over the Sun Devils and Trojans. Broadus is ranked No. 130 overall in the ESPN 300.