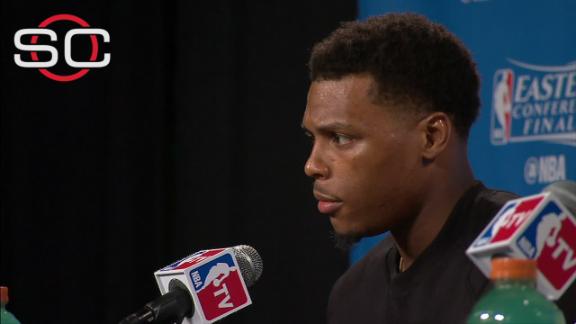 ESPN
By Mike Mazzeo
Raptors coach Dwane Casey told reporters Friday that Kyle Lowry didn't quit on his team when the two-time All-Star point guard went back to the locker room briefly to "decompress" and use the bathroom late in the first half of Toronto's 108-89 Game 2 loss to the Cleveland Cavaliers on Thursday night.

"Kyle did not walk out on his team," Casey said. "He and Cory Joseph use the bathroom more than any two human beings I know during the game. ... I don't think he quit on his team."

Lowry faced criticism after he left the bench with 2 minutes remaining in the second quarter "just to kind of decompress." At the time, he was 0-for-4 from 3-point range and had committed five turnovers. Cleveland closed the first half on a 16-2 run to take a 14-point halftime lead.

Through the first two games of the Eastern Conference finals, Lowry is averaging 9.0 points, 4.0 assists and 4.5 turnovers while shooting 28.6 percent from the field and 1-for-15 from 3-point territory.

The Raptors lost Games 1 and 2 by a combined 50 points. Game 3 is Saturday in Toronto.

Casey said center Jonas Valanciunas, who has been out since spraining his right ankle in Game 3 of the team's second-round series with Miami, is doubtful to return Saturday.

"I don't foresee [Valanciunas playing] tomorrow night, and after that we'll just have to wait and see," Casey said.

Casey: 'Kyle did not walk out on his team'
Raptors coach Dwane Casey explains why he doesn't believe Kyle Lowry quit on the team by heading to the locker room in the second quarter so he could decompress.