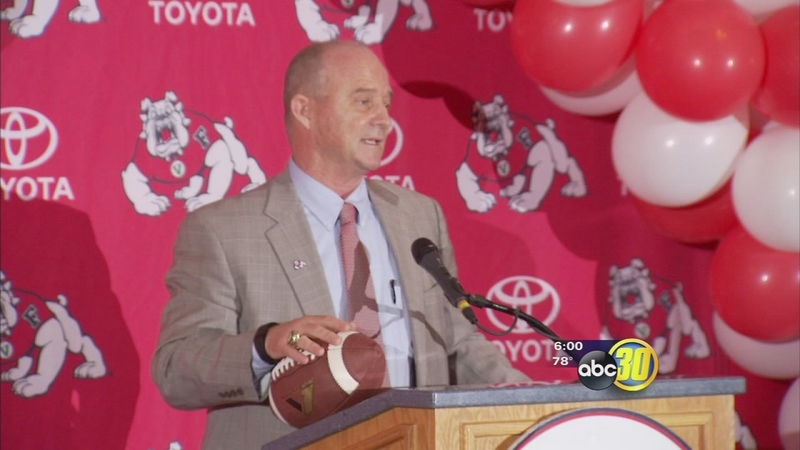 Tedford's arrival to the Central Valley was based on the departure of Tim DeRutyer after four plus seasons with the Bulldogs. If Michigan got its Michigan man with Jim Harbaugh-- Fresno State got its Fresno State man in Tedford.

"This opportunity is a great fit for me. Because I do understand the tradition of Bulldog football. I know where it's been and I know where it should be."

Die hard red waver know Tedford's history in the Central Valley. Those that do not need to know he played quarterback for the dogs in 1981 to 82. Came back as an assistant coach in the early-mid 90's and now he's back once again. This time as head football coach.

"And during our extensive interview with Jeff on Monday, he impressed the entire search committee," said Dr. Joseph Castro, Fresno State University President.

Tedford spent 11 seasons at Cal, turning around a program that had won just one game the season before he arrived in the east bay.

Those bears teams immediately got better and included dozens of NFL players-- including names like Rodgers, Jackson and Lynch.

Bulldog fans are hoping Tedford will bolster a Fresno State roster in desperate of talented players that fit his system.

"It starts with recruiting the Valley and making sure that we keep the guys in the Valley home that want to be here. When I was here, I knew how this thing was built. It was built with blue collar players who really appreciate the Valley and what Fresno State stands for," said Tedford.

Teford will finish out his duties with Washington this weekend and then start assessing the Bulldog football program next week.

Tedford's past has many Fresno State football fans excited about the future.

Tedford's past has many Fresno State football fans excited about the future.

With two home games still left to play Fresno State's 1 to 9 record has frustrated the fan base.

"You know 8,000 fans in the stands is not right. All of us have to buy into this together," said Jim Bartko, Athletic Director.

Tedford's return to the Valley has fired up long-time football supporters like Nick Dvorak and Harry Markus. They helped raise money to build Bulldog Stadium.

"Here's a guy who has played here, coached here. He was with Sweeney. He knows the towns around the Valley. He knows California. His recruiting is like premier," said Markus.

Fans expect Tedford to turn the program around but Fresno State also has an ambitious $60-million plan to upgrade the stadium. If you want to build it, they, the loyal boosters, must come up with the funds to make it happen.

"We need to get the buzz and part of that will be the stadium. People will come out to refurbish and spend their money and their time and all of it should go together," said Dvorak.

So the focus is not just on a winning season but on the future. A return to a time when fans went all-in on the dogs and the team was one the red wave could be proud of.

"That's what's exciting to see. Get the old guard back in here. Get them energized and get them back in the groove supporting the program and then the youngsters too. Get that groundswell of support," said Ed Dunkel, Bulldog Foundation.

Many former Bulldogs were there to show their support for coach Tedford. They clearly were excited for what many called the obvious choice to take over the program.