LeBron James aspires to own NBA team, but 'it's not like it's a dream of mine' 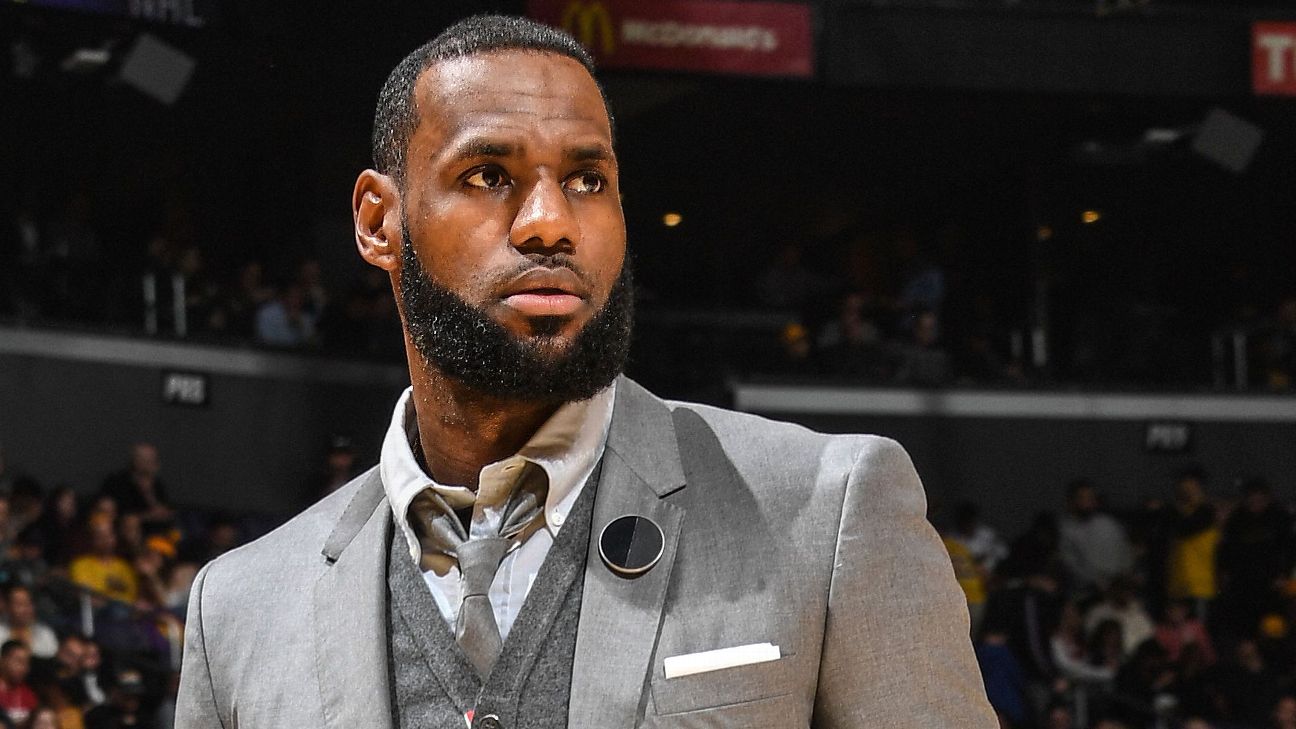 CHARLOTTE, N.C. -- With Michael Jordan hosting All-Star Weekend as the only former player to serve as the principal owner of an NBA team, LeBron James said that while team ownership is a goal for when he is finished playing, it's not his singular focus.

"It's not that it's intoxicating to me, and I don't think about it on a day-to-day basis," James said when asked about NBA ownership at Saturday's All-Star media availability session.

It was a step back from his recent declaration to The Athletic about the subject, when James said, "Ain't no maybe about it. I'm going to do that s---."

"I was asked a question and, um, I answered it how I felt at that point in time," James said Saturday. "I believe if I wanted to, I could own a team or be part of a basketball team. I know I got so much knowledge of the game that I don't want to, once I stop playing, I just [do not] want to get away from the game.

James has a net worth of more than $450 million, according to Forbes, while the average NBA team is worth $1.9 billion. Team values are only going up as the NBA continues to find new revenue streams both domestically and across the globe.

Beyond raising enough capital to jump in the ownership pool, James said there are other parts of the puzzle that would have to come together first.

"I got a lot more game to play. I got a lot. A ton more years to play this game and suit up and be in a Lakersuniform. Once we get to that point, we'll cross that path. Hopefully I can sit up here and answer questions as a player for a long time."

While James distanced himself somewhat from following in the footsteps of Jordan, who owns the Charlotte Hornets, he is on course to pass him on the career scoring list sometime after the All-Star break. James is currently No. 5 on the list with 32,082 points, just 210 points behind No. 4 Jordan (32,292).

"One thing I can tell you is anytime I'm mentioned with one of the greats, if not the greatest that ever played this game, it's crazy to me. It really is. It's crazy to me when I'm talked about with some of the greats. You talk about MJ, who I looked up to and always believed was the greatest. It's just pretty cool, and I have no idea how I've been able to do it."

Jordan played in 14 All-Star games; James is making his 15th appearance Sunday. While he has heard comparisons for years -- inviting some by wearing No. 23 and openly pining for GOAT status -- James is seeing the big wheel turning with Duke sensation Zion Williamson being compared to him.

James spoke just as glowingly about former teammateKyrie Irving. The Boston Celtics star, who teamed with James to deliver the Cleveland Cavaliersan NBA title in 2016, recently revealed to reporters that he called James this season to apologize for how their partnership fell apart.

"I think I've always loved Kyrie, from before I met him, until when I became his teammate, to even now," James said. "So the phone call, more than for me, I think just to see his growth ... it takes a real man and a real person -- and a real person to understand who they are -- to be able to call or to do anything and be able to see their wrongdoings or believe they have some wrongdoings and then be able to come to grips with that and then be able to either apologize or say that, 'At that point and time, I thought I was ready for something, but I really wasn't.'

"... I really don't want to talk about it too much, because it's not for everybody. ... I love Kyrie. I love everything about Kyrie."

James touched on a variety of topics during the 20-minute media frenzy, including:

He supported Colin Kaepernick and Eric Reid after their collusion lawsuit against the NFL was settled Friday.

"I stand with Kap. I kneel with Kap," James said. "I feel what he was talking about, nobody wanted to listen to. Nobody wanted to really understand where he was coming from. I think that anybody that would sacrifice their livelihood for the betterment of all of us, I can respect that. And he's done that.

"You've got a guy that basically lost his job because he wanted to stand for something that was more than just him. I'm happy to see the news come out that he won his suit. I hope it's a hell of a lot of money that can set not only him up, but set his grandkids up for the rest of their lives. And I hope that the word of what he did will live on through American history but also world history, because it's important for all of us -- not only African-Americans, but everybody that wants to stand up for something more important than them."

"I think everything in life you have to appreciate, no matter if it's good or bad. ... I knew at that moment that I was bigger than just basketball and I had to say something. Because it wasn't just about me. It was about all of us. It'd be [like] telling you guys to shut up and just write. And you guys not having a platform. Or just shut up and be a doctor. Or just shut up and be a lawyer. Just shut up and be a teacher. Shut up and do whatever your occupation is. And I just think that's unfair to all of us because we are so much more than what our occupations say or what our nametag says. So for me to be able to have this platform as I did one year ago and for me to be able to have that feeling throughout my body when I heard that, I think it has not only resonated with me, but it's resonated with a lot of people to be able to feel like they can be more.

"So like I said, I thanked her for that moment, and we all should thank her. Like I said, you have to appreciate anything that comes along, no matter if it's good or bad, because it helps you learn, it helps you become better at who you are, it helps you get more understanding of who you are or more understanding about what the situation is at that point and time. So I'm always thankful for not only the good, but the bad that's come across my life since I've been on this journey."

He reflected on his final chance to share the court with Dwyane Wade on Sunday.

"Every bit of time that I get with him this weekend is going to be always cherished, and it's great," James said. "I mean, we've been together almost 17 years now since we met at the combine in Chicago in 2003. And from that moment, we just knew that we were going to be together for a long time, and it hasn't stopped. From me being a competitor, from me being his teammate, to being a competitor again. From us sharing father advice, to sharing marriage advice, to sharing son advice, it's really bigger than just basketball when it comes to me and D-Wade. Because we can actually look at each other and know what each other is thinking and know how each other are feeling at certain points and times of our lives.

"So to be here and for me to be able to choose him to be a part of Team LeBron, for him to be here this weekend, it's a bittersweet moment, obviously. The bitter part that this is his last weekend being at All-Star Weekend and knowing that his journey is coming to an end as far as a basketball player. But the sweet moment is that we got so much more life to live together, and we will continue that." 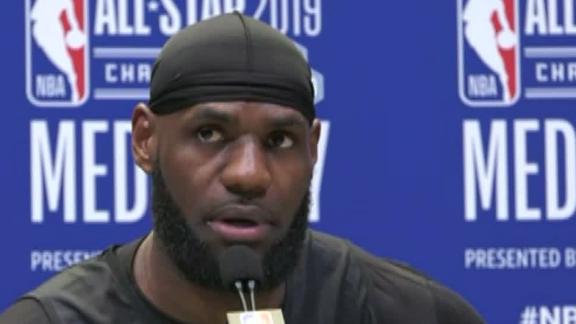 LeBron: 'Crazy to me' to be compared to Jordan
LeBron James says that he's always looked up to Michael Jordan and it's "crazy" to be compared to him.
Report a correction or typo
Related topics:
sportsespnall star gameownershipnba all star gamekyrie irvingmichael jordannbamjlebron jameslos angeles lakers
Copyright © 2021 ESPN Internet Ventures. All rights reserved.
More Videos
From CNN Newsource affiliates
TOP STORIES