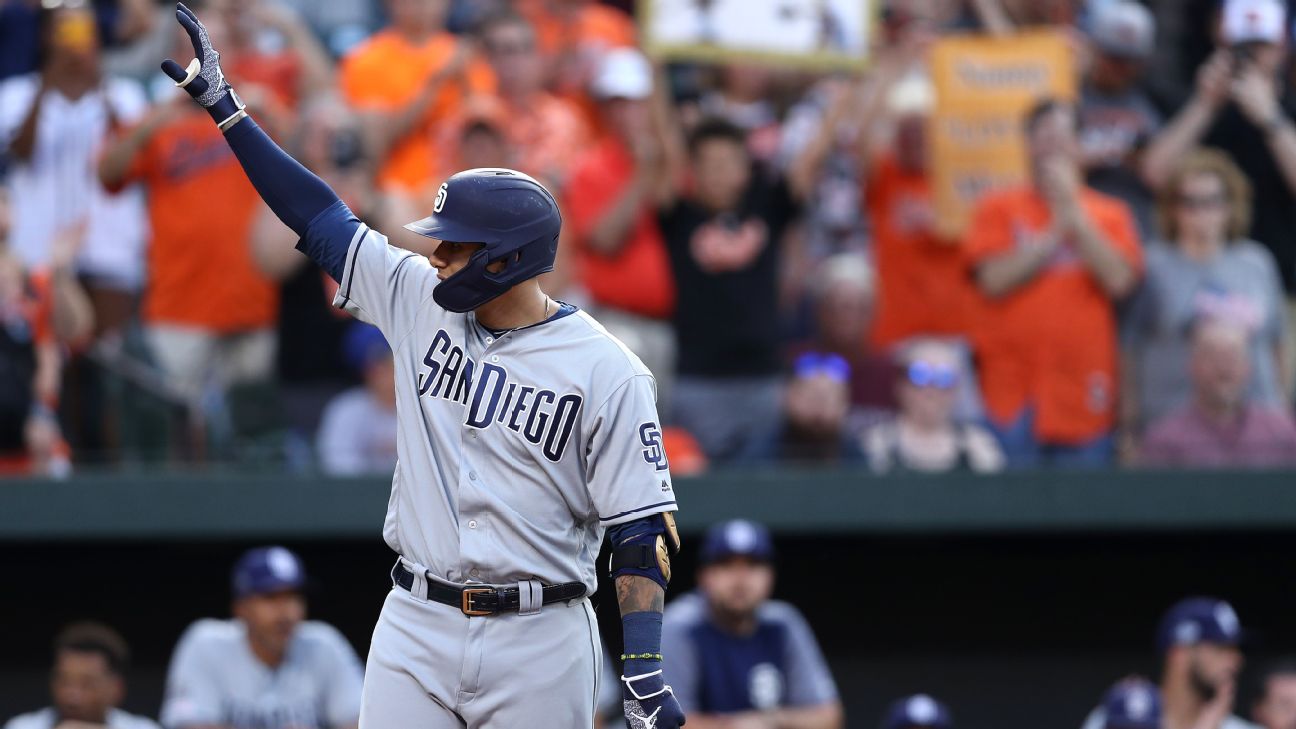 BALTIMORE -- Manny Machado turned his butterflies into a big fly.

Prior to his Camden Yards homecoming on Tuesday night, Machado admitted to feeling nervous -- then he went out and homered against his former team. In his second at-bat, leading off the third inning, the ex-Oriole jumped all over a first-pitch fastball fromBaltimorestarter Jimmy Yacabonis and sent it screaming over the wall in left-center field. The solo blast, which was Machado's 100th career homer at Camden, traveled an estimated 455 feet.

Before he struck out looking in the top of the first inning, theSan Diego Padresstar received a roaring, 40-second ovation from the crowd of 21,644, nearly double the average Tuesday night draw at Camden this season.

"It was awesome," Machado said. "The fans, like always, didn't disappoint. It was good to come back home. I wasn't expecting anything, but they did go above and beyond. It's truly special -- something that I'll never forget."

"He doesn't always get a great reception in other cities," Green said. "He gets tough receptions a lot of times. So to see a team that he considers home treat him the way they did today, it meant a lot to me, and I'm sure it meant a lot to him, as well."

Machado followed up his third-inning homer with an RBI single to left field in the fourth. He finished the night 2-for-4 with a walk in San Diego's 8-3 win.

"I'm a little more nervous today to come there," he told reporters pregame. "I'm never nervous. I guess it's like a weird nervous, in a way. It's just different."

It didn't take long for the butterflies to escape.

"Once I put on my uniform, it went away," Machado said after the game. "That's the beauty of being a baseball player. Everything goes away and you can just focus on playing baseball."

"To do what he did today, I know it meant a lot to him and his family," the manager said. "It's fun to watch a good person experience a really good day."

Machado was drafted by the Orioles in 2010, when he was the third overall selection behind Bryce Harper and Jameson Taillon. He debuted with the Orioles on Aug. 9, 2012, and helped turn a moribund franchise into a contender, as Baltimore made the postseason three times during Machado's time there.

A four-time All-Star who is known just as much for his defensive prowess as his slugging, the 26-year-old third baseman won a pair of Gold Gloves with the Orioles. In 2013, he won the Platinum Glove, an award given to the best defender in each league.

Instead of trading Machado following the 2017 season, with a year left on his contract, the Orioles opted to keep him in hopes of making a return to the playoffs. But Baltimore quickly faded from the playoff picture, leading to rampant speculation that the O's would ship Machado to a contender. On July 18, 2018, the day after he made his fourth All-Star appearance, Machado was dealt to the Dodgers, with whom he moved to his natural position of shortstop and was part of a World Series run.

In February, Machado signed a 10-year, $300 million contract with the Padres. At the time, it was the largest free-agent contract in the history of North American pro sports. On Tuesday, Machado admitted that leaving as part of a trade was the lesser of two evils.

"I didn't make the choice. It was made for me. So it makes it a little easier," Machado said. "They just ship you away, and you're going somewhere else, across the country, and trying to meet new faces. It's hard. But I don't think any of the choices are easy. When you're here for so long in a place that you call home, you see the same faces every day, the same people, it grows on you. To leave like that halfway through the year, it kind of sucks."

As for his return, besides having steamed crabs for dinner (which he said he would do after Tuesday's game), Machado said he didn't have any expectations.

"I don't expect anything," he said before Tuesday's game. "I expect to go out there and play baseball and win and just enjoy myself like I do every day. You really can't expect anything. Whatever happens, happens. You just take it and enjoy every moment of it, like I do every time. I know it's the first time coming back. I'm going to see a lot of fans that supported us seven years, that I saw at third base, that I saw in the on-deck circle, I saw in the first row. Those faces will never be forgotten. Those fans were always there for us every single day. To see them again, it's going to pretty fun to see those faces again."

Although Tuesday's crowd was relatively large by 2019 Orioles standards, Machado saw fewer faces than he typically did during his time in Charm City. Baltimore owns baseball's worst record at 22-57 and ranks 28th out of 30 teams in attendance, with an average of 16,758 fans per game.

The Padres, led by Machado and shortstop Fernando Tatis Jr., are 39-40 and chasing the second wild-card spot in the National League. 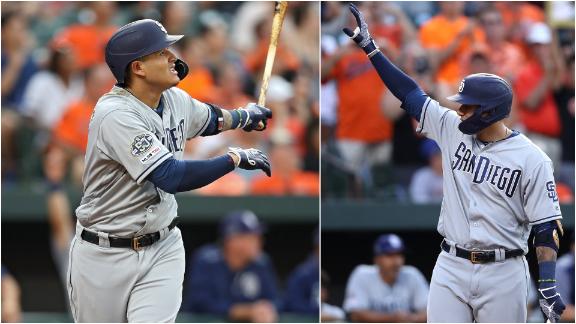