NFL MVP watch 2021: Ranking the top candidates and risers in a close race, including Tom Brady an... 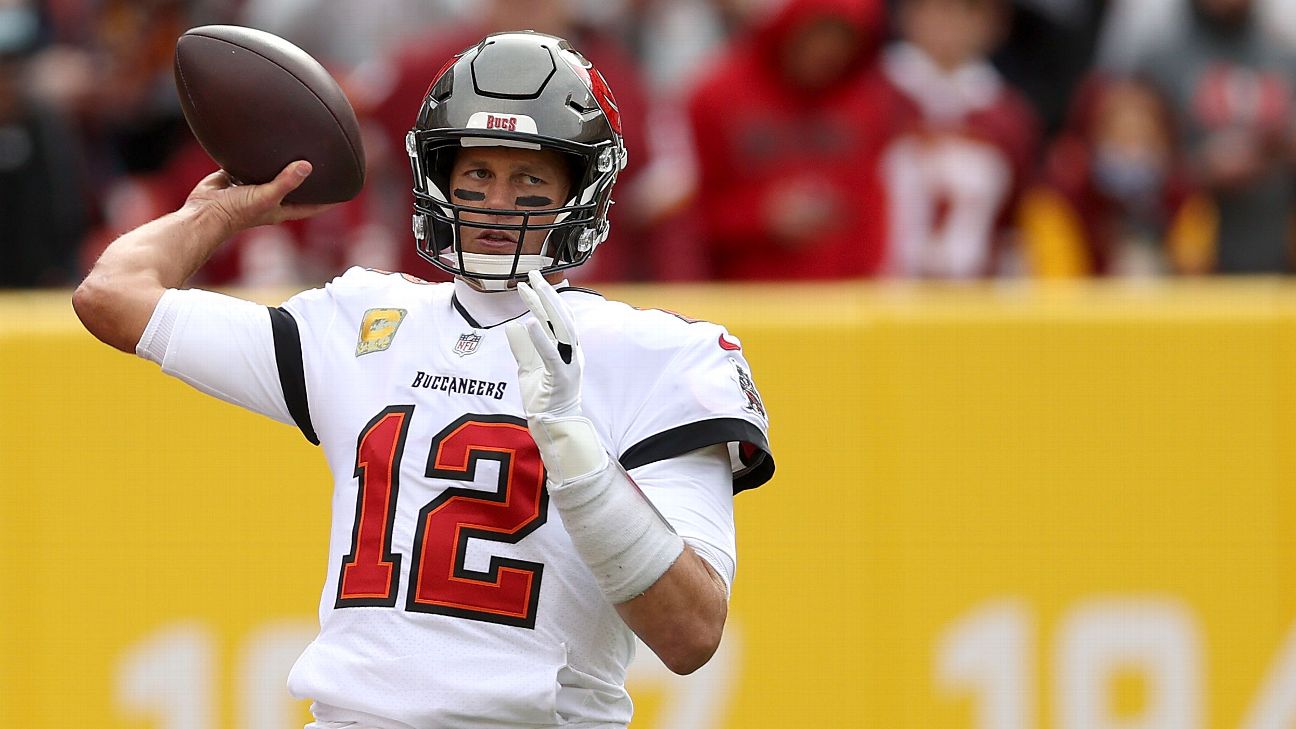 The NFL is a strange place in 2021. Every franchise has lost at least two games, marking just the fourth time since the 1970 merger we've seen that 10 weeks into the season, according to ESPN Stats & Information research. And that kind of parity impacts how we judge the league's best players.

No Most Valuable Player hopeful is flawless this season, and the race is razor-thin. In fact, every top candidate has at least one puzzling loss on his résumé. Dak Prescott played late into the fourth quarter of a 30-16 blowout by Denver, while Tom Brady and Lamar Jackson took Week 10 losses against two-win Washington and Miami teams, respectively. Turnovers from Josh Allen and Matthew Stafford have raised eyebrows in recent weeks too. The list goes on. So who are the MVP favorites right now?


We asked a group of analysts -- Stephania Bell, Matt Bowen, Mike Clay, Courtney Cronin, Dan Graziano, Jeremy Fowler, Domonique Foxworth, Kevin Seifert, Field Yates and Seth Walder -- to vote on the top players in the MVP race right now. Then we used those 10 sets of rankings to give our top six candidates overall, using Heisman Trophy-esque scaling for each ranking, to determine how the field stacks up to this point. (Because it is such a close race, we dove in on six players rather than the usual five.)

We'll also look at a few players who have seen their MVP stock either spike or plummet in recent weeks. And finally, ESPN analytics writer Seth Walder weighs in on an under-the-radar MVP-caliber player, and ESPN Chalk analyst Doug Kezirian identifies his top value bet for MVP at the moment. Eight weeks remain in the regular season, with plenty of opportunities for the league's leaders to pad their cases or surprise candidates to emerge, but here's a look at where things stand entering Week 11.

Note: All odds are viaCaesars Sportsbook.

Even after losing to Washington as a double-digit favorite -- the seventh instance of that happening in Brady's career -- and suffering back-to-back losses for the first time since he arrived in Tampa Bay, the Bucs' quarterback is our front-runner for MVP. Simply put, Brady has been consistently excellent at 43 years old, aside from his outing at Washington. (Brady has the second-best odds in Las Vegas at +400.)

If he throws at least 130 passing yards and three passing touchdowns against the Giants this week, he'll be the first QB with 3,000 passing yards and 30 passing touchdowns through his team's first 10 games of a season since Patrick Mahomes achieved that feat during his MVP year in 2018. Brady currently leads the league in passing TDs (27) and has the easiest schedule of any candidate the rest of the way -- including matchups with the Giants, Jets and Panthers (twice) -- to capture his sixth MVP title.

Jackson might not be the league's most impressive quarterback from a statistical standpoint, but he has kept the Ravens' season alive despite Baltimore's long list of injuries. And along the way, he has dispelled every notion about his growth and the limitations of his game in his third season by proving he can be an elite passer and shoulder the load while his team is playing from behind. Jackson erased double-digit deficits against the Chiefs, Colts and Vikings in leading the Ravens to wins.

Prior to a head-scratching 22-10 loss to Miami, the Ravens had scored at least 14 points in all 45 of Jackson's career starts. That was the longest such streak by any starting quarterback to begin his NFL career since 1950 and a testament to his impact on the offense. If Jackson can lead the Ravens to the No. 1 seed in the AFC playoffs, he'll certainly have a good shot at his second MVP award in three seasons (+1100).

Prescott's return (calf) to the Cowboys' offense in an embarrassing Week 9 loss to Denver temporarily hurt his MVP odds; but his performance against Atlanta in Week 10 put him back in the driver's seat (+700). The Dallas signal-caller completed a season-high 77.4% of his passes for 296 yards and two touchdowns in the win over the Falcons.

With Prescott at the helm, Dallas looks like it has an offense that can contend for a Super Bowl. The Cowboys lead the NFL in points per game (31.6) and yards per game (433.9) this season. The last time they did that this late in the season was in 1995, when they won a Lombardi trophy.


What's most impressive is how well Prescott is playing under pressure. According to ESPN Stats & Info data, Prescott leads the NFL in QBR when pressured (69.2). His QBR actually goes up when he is under duress. Prescott is the only quarterback who can make that claim this season, and only four QBs in the past 15 seasons have finished with a higher QBR when pressured than not pressured.

We last saw Murray in Week 8, when he struggled in prime time against Green Bay (274 passing yards, zero touchdowns, two interceptions and his lowest completion percentage of the season) and sustained an ankle injury that later sidelined him against San Francisco and Carolina. Murray built himself a cushion early in the season in leading Arizona to a seven-game win streak, but his absence these past two weeks could severely impact his chances; he is now +1200 in Vegas to take home the hardware.

Aaron Rodgers and Jackson only missed one game each in their respective MVP campaigns in 2020 and 2019, and both absences came in Week 17, when their teams had already secured a spot in the postseason. Murray will need some monster performances when he returns if he wants to climb back to the top spot in the race.

Allen righted the ship after Buffalo's bizarre 9-6 loss at Jacksonville -- where he committed three turnovers -- by dismantling the Jets' defense in one of his best outings of the season. He threw for 366 yards, two touchdowns and an interception in a blowout victory. Allen is the current favorite in Vegas with +250 odds to win MVP.

Including the win over the Jets, the Bills have scored 40-plus points in seven different games started by Allen, three of which have occurred during this season. The Bills face the defending Super Bowl champs in Week 14 and have New England twice in a four-week span during the back half of the season that will test Allen's fortitude.

Stafford's MVP odds (+900) took a hit after he threw interceptions on back-to-back drives in back-to-back losses to Tennessee and San Francisco. Those turnovers are the catalyst behind Los Angeles' recent struggles, and Stafford hasn't been able to lead the offense back from early deficits -- despite the efforts of wide receiver Cooper Kupp, who is a sleeper MVP candidate himself.

Stafford's biggest struggles of late have come on third down. In Weeks 9 and 10, Stafford's first-down percentage on third-down throws dropped 32% from where it was in Weeks 1 to 8, and he has one touchdown and two interceptions on third down in those two weeks as compared to five TDs and no interceptions in the opening eight weeks.

He still leads the league in passing yards (3,014) and QBR (67.1) but needs big performances against other teams with MVP candidates (Green Bay, Arizona and Baltimore) to work back up the list.

The reigning MVP didn't throw a touchdown in a win over Seattle, his first game back since being activated off the COVID-19/reserve list, and his numbers through eight games are nowhere close to his best. Rodgers has completed 67.1% of his passes for 1,894 yards and 17 touchdowns. But the Packers' quarterback proved last year at this time that he can kick into a higher gear to finish out the season. With his team in position to land the NFC's overall No. 1 seed, it's likely Rodgers does just that while improving his MVP odds down the stretch.

The Chiefs are surging after a 3-4 start, with consecutive wins over the Giants, Packers and Raiders. Mahomes worked his way back into the MVP conversation, throwing five touchdowns against Las Vegas in prime time. He is second in the NFL in passing yards (2,940) and passing touchdowns (25), and he has the Chiefs in first place in the AFC West. If Kansas City keeps winning and jumps Tennessee in the AFC, there's a legitimate argument to keep Mahomes in the MVP mix.

Tannehill has steadily built his MVP résumé during Tennessee's six-game win streak. In a triumph over the Colts during Week 8, when star running back Derrick Henry was held to 68 rushing yards, Tannehill stepped up and went 10-for-11 for 155 yards when targeting A.J. Brown. It marked the start of a nearly unstoppable three-week stretch for the QB-WR duo. The win over Indianapolis was Tannehill's 17th as a starting quarterback when trailing by double digits, the second most by any QB since 2012. The Titans have eked out four wins by three points or less this season (versus Seattle, Buffalo, Indianapolis and New Orleans), and even without the injured Henry, they are in prime position atop the AFC South behind Tannehill.

The Raiders' quarterback was off to an MVP-like start in September, but he has since cooled off. Carr had five turnovers the entire season before a Week 9 loss to the Giants, but he had a fumble and two interceptions against New York, including a pick-six that played a huge factor in deciding the game. The Raiders have dealt with a ton of off-field chaos this season, so it's nothing short of a miracle that Carr has his team at 5-4.

When have we ever been able to call Mahomes an under-the-radar player? I'll take my chance while I can. Mahomes has not been nearly as efficient as we expect, but there is a volume case for him. He has simply had more plays than any other quarterback. Despite ranking 10th in QBR, Mahomes' points above average -- the number of points he has generated over a player with a 50 QBR and the same number of action plays -- ranks fifth, one spot ahead of Murray. Let's not write him off quite yet.

Prescott at +700 seems like a nice MVP payday, if Dallas can land that coveted No. 1 seed in the NFC. The Cowboys have a relatively easy schedule the rest of the way, and Prescott's numbers certainly stack up with the NFL's best. 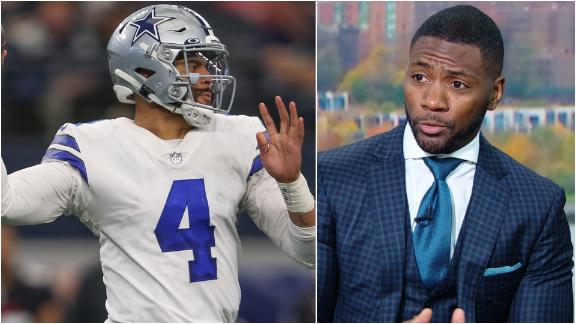 What kind of statement did the Cowboys make with their blowout win?
Ryan Clark and Dan Orlovsky react to the Cowboys' 43-3 win over the Falcons. 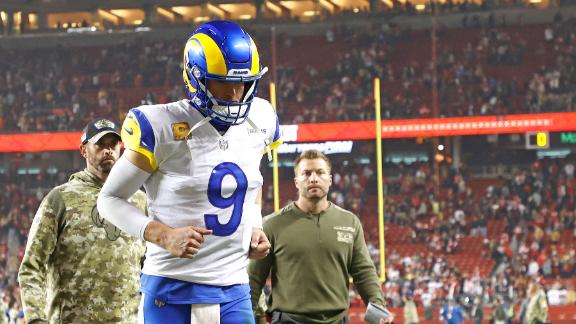 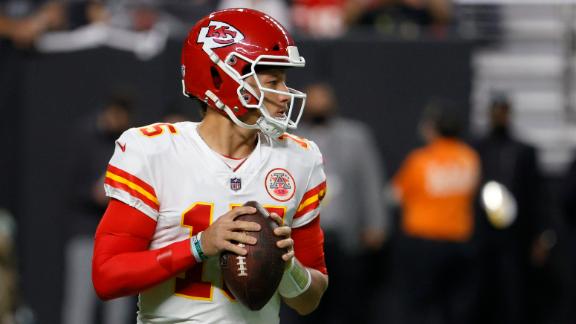