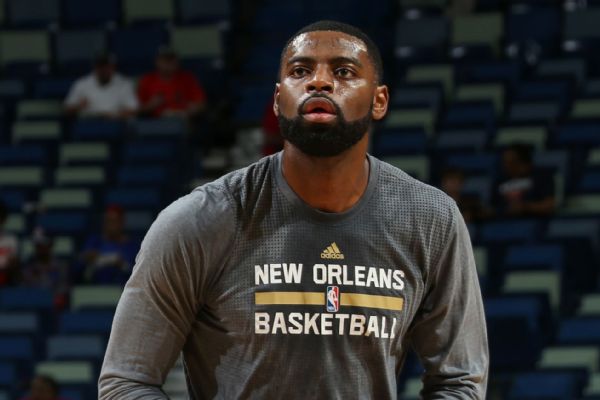 NEW ORLEANS -- Tyreke Evans will take the court for the New Orleans Pelicans for the first time in nearly 11 months on Thursday against the Indiana Pacers after undergoing three right knee surgeries in the span of nine months.

Evans said he will begin his return on an unspecified minutes limit and will not play in back-to-backs.

"It feels good," he said about his return. "Just putting the work I've been putting in. Just having the chance to get my feet wet, for the first game. I've been working hard all summer just to get in this position from the surgery I had, [which was] a tough surgery. I'll see how I feel and see if I can go at a good rate."

The 27-year-old was nearing a return two weeks ago, but he said he felt a pull on his left calf going up for a layup in practice on Nov. 30, which he thought was a result from "not running a long time." Evans said his calf is still a little sore but that "I've felt worse pain."

Asked if he feels 100 percent back to the player he was before the surgeries, Evans said: "Not 100 percent, but I definitely feel way better than last year, just from after the surgeries. Dr. [Riley] Williams did a great job with the surgery. My knee is feeling way better, no pain. So that's a good sign."

Evans, who last played on Jan. 25, 2016, said that he was willing to play through any injury when he entered the NBA out of Memphis in 2009-10, but his experiences over the past year-plus have taught him to take a more cautious approach to rest and recovery.

"When I'm hurt from now on, I know if I can't go I'm not going to play," he said. "It's just the risk you have on yourself. Me getting older, learning about that, about my body, knowing when to play and when not to play -- [that] has a lot to do with me now. It's my eighth year."

Pelicans general manager Dell Demps said on Dec. 1 that Evans is in "tremendous shape," but that the team plans to work him back into game action slowly. Pelicans coach Alvin Gentry said he doesn't anticipate Evans will be able to play long stretches right away, but he envisions him in a role similar to the one Lance Stephenson played for New Orleans before Stephenson was waived in early November after suffering a groin injury that required surgery.

After playing in a career-high 79 games in 2014-15, Evans underwent arthroscopic surgery on his right knee in May 2015 to remove loose particles. Evans then bumped knees with Kendrick Perkins in preseason practice, causing a chip in his right knee that required surgery.

He returned Dec. 1, 2015, but persistent knee swelling -- despite the draining of fluid -- led to an osteochondral autograft transfer system procedure in February to replace cartilage in three areas of his knee.

Evans revealed on media day in late September that he also sustained a blood clot in his calf following the February surgery but that it went away after two days and didn't consider it an issue moving forward. He returned to non-contact action in practice on Nov. 15.

"The first couple weeks of the surgery, after I got the surgery, was painful, the worst feeling of my life," Evans said. "But once I started to ramp up in New York with my treatment and ride a bike, everything started to go real smooth."

Tim Frazier also said on Thursday that he will miss the next 7-10 days after sustaining a bone bruise on his right wrist in Tuesday's 113-109 loss to the Golden State Warriors.