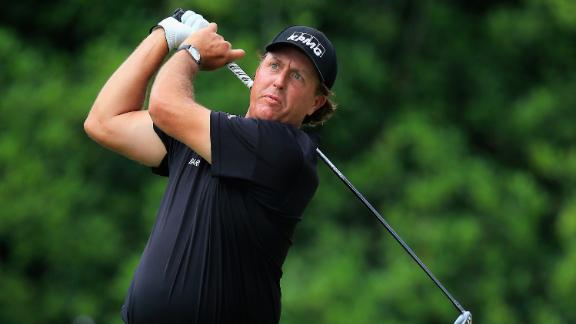 PINEHURST, N.C. -- Phil Mickelson's quest for the fourth leg of the career Grand Slam got off to a decent start Thursday, an even-par 70 at Pinehurst No. 2 that left the five-time major champion in solid position after his first round at the U.S. Open.

Mickelson, however, lamented a putting stroke that has been giving him fits this year and caused him to switch to a different grip this week. Following his round, he went to the practice putting green before meeting with the media.

"The one club that's hurting me is the putter," Mickelson said. "So I've got to get that turned around in the next couple of days."

Mickelson, who has finished runner-up in a record six U.S. Opens, has never shot worse than par in the opening round of any of his major victories. And his 13 greens in regulation at Pinehurst is the most he has hit in nine U.S. Open rounds here.

His score left him five strokes behind leader Martin Kaymer.

"We had an early tee time and the greens were soft," said Mickelson, who played with defending champion Justin Rose (72) and U.S. Amateur champion Matthew Fitzpatrick (71). "And there was some good scoring. I'm never upset, anything (around) par, it's usually a good score. It's a good start.

"I didn't hurt myself any, I had a chance to get to 3, 4, 5 under today, had some makeable opportunities. But I didn't throw anything away on some of the short ones."

Mickelson was pleased with his driving, especially the driver, with which he didn't miss a fairway.

"It's an unusual thing for me," he quipped.

But putting remains the aspect that frustrates him, evidenced by the 31 putts he took during Thursday's round. Mickelson went to a "claw" putting grip on the 11th hole Sunday of the FedEx St. Jude Classic in Memphis. He said he would use it again this week, although he doesn't appear committed to it long term.

"I like putting conventional," he said. "It might be weeks, it might be months, it might be days, hours. I don't know. It's just one of those things. Last year I putted just so well and I've kind of overdone what I was doing. I've got to kind of settle back in.

"The claw helps with my alignment, it keeps my lines straight and it takes some off the pressure and hit out of it with the bottom hand. So when that starts to go away, I'll go back to my natural grip."

Mickelson, Rose and Fitzpatrick begin their second round at 1:36 p.m. ET on Friday.

Mickelson In Contention At U.S. Open
Phil Mickelson is within striking distance at the U.S. Open.