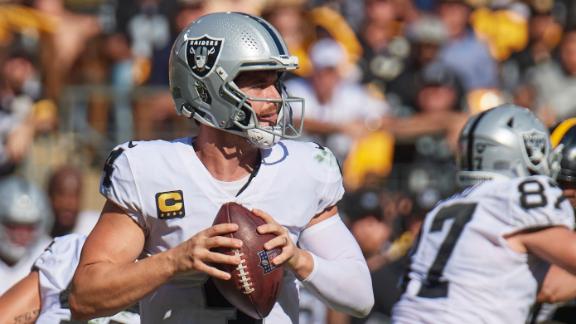 
OPENING LINE: Raiders by 5 1/2, according to FanDuel SportsBook.

TURNOVER DIFFERENTIAL: Dolphins even; Raiders plus-2.

DOLPHINS PLAYER TO WATCH: CB Xavien Howard. Howard had an INT and two passes defensed last week after getting a forced fumble and recovering a fumble in the opener. He's the only player with an INT, forced fumble and fumble recovery this season. Howard is tied with New England's J.C. Jackson for the most INTs over the past two seasons with 11.

RAIDERS PLAYER TO WATCH: QB Derek Carr. Carr has thrown for 821 yards the first two weeks, the seventh-best total in NFL history. He has at least 375 yards passing and two TDs in both games so far and has topped 300 yards in four straight dating to last season. Rich Gannon has the only longer streak for the Raiders with six straight 300-yard games in 2002.


KEY MATCHUP: Raiders DL vs. Dolphins OL. The Raiders have been one of the best pass-rushing teams early this season led by edge rushers Maxx Crosby and Yannick Ngakoue. They have five sacks and have generated consistent pressure in both games. Now they face a Dolphins line that has allowed eight sacks, including six last week.

KEY INJURIES: The Dolphins will be without QB Tua Tagovailoa, sidelined by a rib injury. Jacoby Brissett will start in his place. ... OL Jesse Davis and WR Jakeem Grant, who left the Buffalo game with injuries, were back at practice on Wednesday. ... WR Will Fuller, who didn't play in Week 2 for personal reasons, is practicing and the Dolphins expect him to play against the Raiders. ... Las Vegas will be without G Richie Incognito (calf) for a third straight week. ... RB Josh Jacobs (ankle) is doubtful after missing last week.

SERIES Game notes
The Dolphins have won 10 of 12 in the series, including a last-minute comeback last year in Las Vegas. ... Raiders QB Derek Carr has thrown for at least 300 yards in his last three meetings against the Dolphins. ... Las Vegas coach Jon Gruden is 2-5 all-time against Miami, winning in the 2000 playoffs for the Raiders and the 2005 regular season for Tampa Bay.

STATS AND STUFF: The Dolphins have been on the losing end of three of the last four shutouts by 35 or more points. ... Miami has allowed opponents to convert 62.1% of third downs, the worst mark in the league through two weeks. ... The Dolphins are looking to win their first two road games of the season for the first time since 2013. ... Miami has two takeaways in each of the first two games of the season, giving the team at least one takeaway in 24 straight games. That's the longest active streak in the NFL and the longest since New England did it 36 games in a row in 2011-13. ... Miami's Jaylen Waddle has 10 catches for 109 yards and a TD, ranking second among rookies in receptions and third in yards. ... The Raiders are looking to become the first team in NFL history to open the season with three straight wins against teams that won at least 10 games the previous year, according to SportRadar. They're the 22nd of those 38 teams to win the first two after beating Baltimore and Pittsburgh. ... The Raiders last started a season 3-0 in 2002, when they went to the Super Bowl. ... Las Vegas K Daniel Carlson has made 26 straight FGs. ... Las Vegas has three takeaways through three games. The Raiders had three takeaways in their first six games last season. ... The Raiders have failed to score on the opening drive in eight straight games with four three-and-outs, two other punts, an INT, and a fourth-down stop. It's their longest opening-drive drought since a 13-gamer in 2012-13.

FANTASY TIP: Stay away from Raiders running backs even if Jacobs is able to play. Raiders backs are averaging just 2.39 yards per carry behind a makeshift line, the second-lowest mark after two games in franchise history.