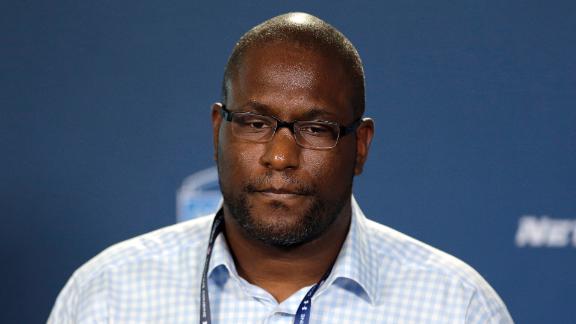 INDIANAPOLIS -- Speaking publicly for the first time since becoming the subject of an NFL investigation, Cleveland Browns general manager Ray Farmer apologized to the organization and the fans for texting Browns staffers during a game, an action that breaks NFL communication rules.

The league recently interviewed Farmer, who texted at least one coach during a game. The results of the probe could result in a fine, a suspension for Farmer and the loss of at least one draft pick.

"I know I messed up," Farmer said Thursday from the NFL scouting combine in Indianapolis. "People understand what the rules are. In my case, I would tell you that it's not an excuse, but sometimes your emotions get the best of you."

Farmer wouldn't reveal the nature of his game-day communication with Browns employees but said he wasn't required to turn over his phone to the league and isn't certain what the punishment will be.

Coach Mike Pettine said Wednesday he was disappointed that Farmer sent the text but stressed the two can still work well together. Farmer believes that his texts did not undercut the coaching staff and that the coach-GM relationship does not require mending.

"I take full responsibility for myself and my actions," Farmer said. "There is a platform to have those conversations. I misplayed that platform. I've corrected that mistake."

"We're going to stick with working in a way where we can have direct conversations [after the game]," Farmer said.

Farmer is looking for quarterback help as Johnny Manziel has been in treatment since Jan. 28. The Browns "knew what those [red flags] were" with Manziel during the 2014 draft process and still selected him No. 22 overall last May, Farmer said. Farmer doesn't think Manziel's absence changes the quarterback outlook. The Browns want to "drive competition at every spot."

Armed with the 12th and 19th overall picks, the Browns will do a "cost-benefit analysis" on whether to trade up in the draft for Oregon quarterback Marcus Mariota or another player, Farmer said.

"Every option is on the table for us," Farmer said.

Farmer also addressed cornerbackJustin Gilbert, the Browns' No. 8 overall pick last year who struggled mightily in his rookie year. Pettine alluded to Gilbert dealing with "personal" problems. Farmersaid the team learned more about Gilbert's issues after drafting him but stresses he believes that Gilbert can be a productive NFL player.

"The player is in there," Farmer said. "I think he's capable and credible."