The incident came just nine seconds into the period after Warriors guard Stephen Curry was called for his second offensive foul of the game and the Warriors' sixth. After exchanging words with referee Ben Taylor, Curry was given a technical foul.

Kerr came to the defense of his star guard, coming onto the floor to protest Taylor's whistle. Kerr was promptly ejected, and replays showed the coach telling the referees, "I don't want to be here anyway," as he continued to protest the calls.

Kerr waved at the referees on his way off the floor and then high-fived some of his players on his way back to the locker room.

After the game, Kerr drew laughter from the assembled media when asked if he wanted to be there.

Kerr acknowledged that he came out on the floor with the purpose of being ejected from the game.

"Yes," Kerr said. "I was trying to make a point and I was trying to back up my guys. We had all these offensive fouls, one after another. And I finally had enough."

After joking that he wanted to be the first person at the Warriors' postgame food spread, the veteran coach said the referees were right to toss him from the game.

"I was in the wrong, obviously." Kerr said. "I got what I deserved."

Curry appreciated the fact his coach was willing to stand up for the team.

"I love it," Curry said. "Love it. We got a good vibe going about what we're doing. It's never too early to get that fire going, so we'll see how we sustain that throughout the year. But when obviously a blatant call, we think, should go one way goes the other, he's going to have a reaction to it. It doesn't matter if it's preseason, regular season or playoffs. It's nice for him to have that fire for sure."

Like many in the Warriors' locker room, Curry enjoyed seeing the replays of Kerr's outburst and subsequent wave after the game.

"We're all in this together," Curry said. "And obviously we have to have each other's backs. It's kind of one of our core principles -- so he has opportunities to try and influence things with outbursts if he needs to or stuff that he says to us in the locker room or whatever the case is. So knowing that we're out there giving it everything we got throughout the year that a coach has your back, not pinching his wallet when he has the opportunity to kind of speak his mind, it means a lot."

Warriors forward Kevin Durant, who also received a technical foul in the first half, said Kerr's outburst was a "top five" ejection that he had seen in his career.

"I guess he's getting ready for the regular season," Warriors forward Kevon Looney said. "I expect one ejection each year. I think he beat KD to it. I thought KD was going to get ejected [first]."

As for Kerr's much replayed words about not wanting to be at the game, Looney couldn't help but chuckle.

"I feel him," Looney said. "Steve's been around a lot of basketball his whole career, so I think he didn't care for this game." 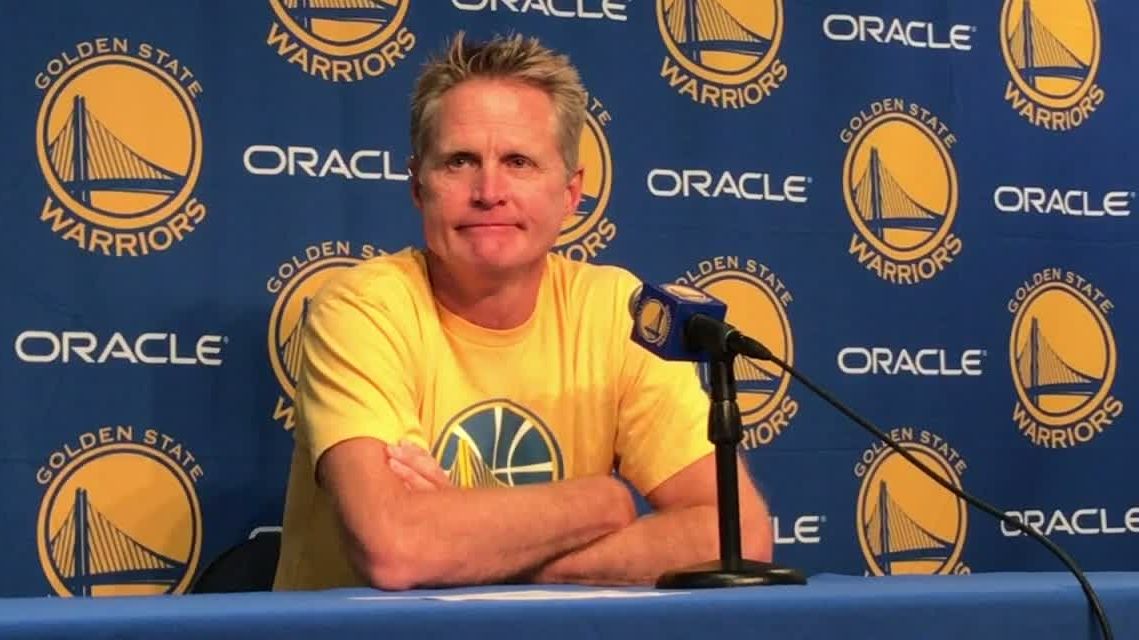 Kerr wanted to get ejected 'to make a point'
Steve Kerr jokes he wanted to get back in the locker room early for the buffet and had enough of seeing his guys picking up offensive fouls.
Report a correction or typo
Related topics:
sportsespnpreseasongolden state warriorsstephen curryejectionnbacoachsteve kerr
Copyright © 2020 ESPN Internet Ventures. All rights reserved.
More Videos
From CNN Newsource affiliates
TOP STORIES