Super Bowl I vs. Super Bowl LIV: How NFL's biggest game has changed 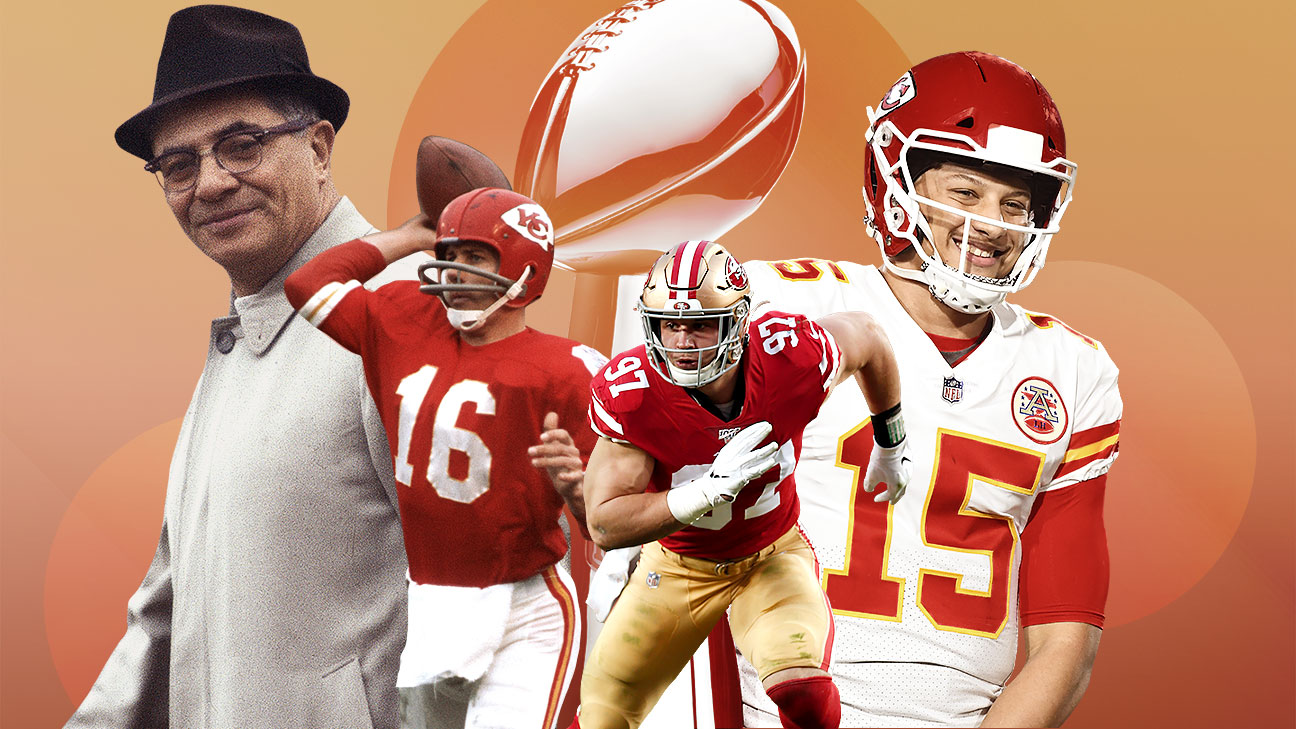 On Jan. 15, 1967, the Green Bay Packers and Kansas City Chiefs squared off inside the Los Angeles Memorial Coliseum in what was officially the AFL-NFL World Championship Game.

Unofficially, it was dubbed the Super Bowl. Fifty-three years later, the game has turned into America's premier sporting event.

On Sunday, the Chiefs will face the San Francisco 49ers in Super Bowl LIV at Miami's Hard Rock Stadium.

From the players to the paychecks and even the trophy's namesake, a lot has changed from Super Bowl I to Sunday's installment. And it is all indicative of the evolution of the nation's most popular sport in the 100th year of the NFL.

In 1966, Packers quarterback Bart Starr averaged 161.2 passing yards per game, good for ninth in the league that season. Today, that might disqualify him from being an NFL starter. Washington's Case Keenum was last among 32 qualifying quarterbacks at 170.7 passing yards per game. Chiefs QB Len Dawson completed 56% of his passes in 1966 to lead all nine AFL teams. The Bills' Josh Allen was last in the NFL in 2019 at 58.8%.

The quarterbacks playing in Super Bowl LIV show how much the game has evolved into a passing league. Dawson averaged 17.8 pass attempts per game in 1966. Current Chiefs QB Patrick Mahomes attempted an average of 34.6 passes per game this season. In 2018, Mahomes threw 50 touchdowns -- three more than Dawson had combined in 1965 and 1966, when he led the AFL in that category.

The linemen ... then and now

Right tackle Forrest Gregg was one of two Hall of Famers on the Packers' offensive line in 1966. He weighed 249 pounds. To put that in perspective, the top-ranked offensive tackle in ESPN's 2019 recruiting rankings, Georgia signee Broderick Jones, is listed at 300 pounds.

The average size of today's NFL offensive lineman is 6-foot-4, 313 pounds. There were 372 players listed at 300 pounds or more on NFL rosters at the end of the 2019 season, with defensive tackles Dan McCullers (Steelers) and Akiem Hicks (Bears) topping the list at 352 pounds. The Chiefs and Lions lead the NFL with 15 300-pounders. In 1966 there was one 300-pound player in the AFL and NFL (Lions DT Roger Brown, who was 300 pounds).

Jerry Kramer was the Packers' other Hall of Fame offensive lineman. In addition to playing offensive guard, he was Green Bay's kicker. Yes, you read that correctly. The kicker.

Tickets for Super Bowl I cost $6, $10 and $12, according to The New York Times. Adjusted for inflation, that $12 ticket is equal to $93.73 today. During Super Bowl LIV week, $94 won't get you anywhere near the game. In fact, parking is on sale for $120 per car/SUV. But the best value for that $94 budget likely comes at the NFL Super Bowl Experience, where adult fans can attend for $20 on Wednesday and $40 on Thursday, Friday and Saturday. Kids 12 and under are free. Activities include autograph sessions with former and current NFL players, running a timed 40-yard-dash against a simulated Saquon Barkley and Derrick Henry (good luck), a Super Bowl rings display and photos with the Lombardi trophy.

At the game, that $94 can either get you two 18-inch Calle Ocho Cubano sausages (for two), four Impossible Burgers, two South Florida seafood paella dishes (for two), 23 hot dogs ($4 each) or 31 boxes of popcorn ($3 each). Those figures are according to Centerplate, the food and beverage partner for Hard Rock Stadium that will also be working its 15th Super Bowl.

As for the tickets, the cheapest seats on Ticketmaster on Jan. 26 were a pair going for $4,750. And that's to sit at the top of the stadium. The most expensive club seats, which weren't an option for Super Bowl I, cost $31,200 on Ticketmaster.

Since the Packers were installed as 14-point favorites over the Chiefs in Super Bowl I, Americans have been eager to plunk down more than a few bucks on the big game. These days, Americans annually bet billions of dollars on anything from point spreads to prop bets on the Super Bowl, making it by far the most heavily bet single game in the United States. In the past 10 years, more than $1.1 billion has been bet on the Super Bowl with Nevada sportsbooks alone, and some experts say Nevada represents less than 5% of the total amount bet on the Super Bowl by Americans.

With more states now getting into the bookmaking business -- more than a dozen are up and running -- the betting interest on the Super Bowl will only grow, as will the wagering menu. This year, U.S. sportsbooks are planning to take bets on everything from the color of the Gatorade dumped on the winning coach to whom the Super Bowl MVP thanks first in his acceptance speech. There will be thousands of options, something for everyone.

While Super Bowl betting is evolving in the U.S., one thing has remained consistent: The house wins. Since Nevada Gaming Control began tracking the betting results on the Super Bowl in 1991, the state's sportsbooks have suffered net losses twice in 18 years. -- David Purdum

The first Super Bowl was the only one to be carried by two networks. CBS and NBC each paid $1 million to broadcast the game in January 1967, according to Variety. CBS carried the NFL in 1966 and NBC held the rights to the AFL. Each network carried the same video feed but used its own set of commentators.

Super Bowl I's halftime show didn't have the Beatles, Duke Ellington or any other big star of the time. Instead, it had marching bands from the University of Arizona and Grambling State, two of the nation's top college bands at the time. In fact, Grambling State played at the AFL title game in 1964, according to the university's website. Now some of the top names in pop music perform during the break. Jennifer Lopez and Shakira are set to take the stage Sunday in Miami.

The Super Bowl trophy was inspired by a football and a box of corn flakes. Oscar Riedner, Tiffany & Co.'s design chief, used the empty cereal box for the base and placed the ball on top.

Starting with Super Bowl V, the trophy was named after former Packers coach Vince Lombardi, who led Green Bay to victory in Super Bowls I and II. Now the award is a sterling silver prize and is given to the winner permanently after each game.

According to Jostens, an average of 416 round diamonds were used for each Super Bowl ring given to the Patriots last year (the CFL's championship ring featured 201 white diamonds, in comparison). Each player's ring is personalized with name and number set with diamonds. It's the largest Super Bowl ring made to date.

The Super Bowl I ring, designed with Lombardi and Jostens, had a total of one 100-point diamond, with the words "World Champions" inscribed. It featured 14-karat yellow gold.

The words "Super Bowl" didn't appear on the ring until the Jets won Super Bowl III, according to the Minneapolis Star-Tribune.

In the postseason, players receive a prize share instead of a game check for each round. Those figures don't fluctuate much depending on the outcome. However, that changes for the Super Bowl. In Super Bowl I, the Packers received $15,000 and the Chiefs took home $7,500 per player.

When adjusted for inflation, things really haven't changed much. The Packers' share from 1967 is worth more than $117,000 in today's market. This year's winner will get $124,000, according to the collective bargaining agreement, and the losers get $62,000. Factoring in the winning share from each round of the playoffs, players on the winning team Sunday stand to make $211,000 for their Super Bowl run.

In an interview after Super Bowl I posted by the Hall of Fame, commissioner Pete Rozelle said the players' shares were determined before the game. He said the game generated more than $1 million in revenue. "From a financial standpoint, it was quite successful," Rozelle said. Forty percent of the net income went into the players' pension fund, while 15% went to each league and another 15% to each team. 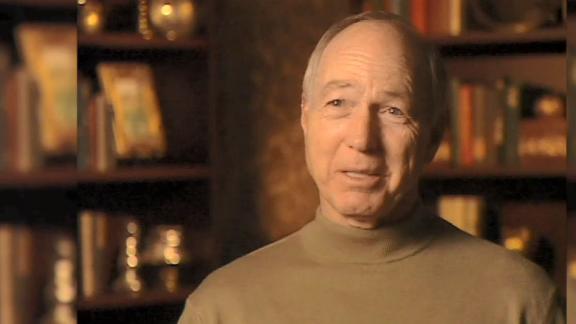 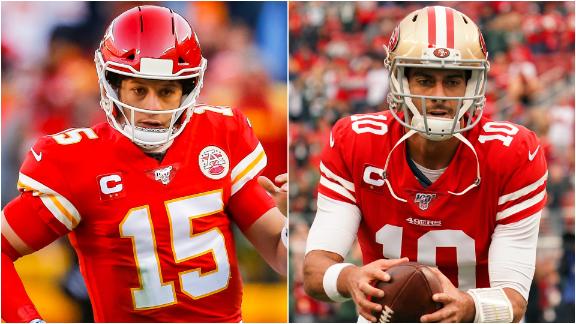 Prop bet for who scores first is a pick'em
Daily Wager breaks down the prop bet of who puts points on the board first in the Super Bowl, which currently has both the 49ers and the Chiefs at -110.
Report a correction or typo
Related topics:
sportsespnsuper bowl isuper bowl livsan francisco 49ersnflgreen bay packerskansas city chiefssuper bowl
Copyright © 2020 ESPN Internet Ventures. All rights reserved.
More Videos
From CNN Newsource affiliates
TOP STORIES