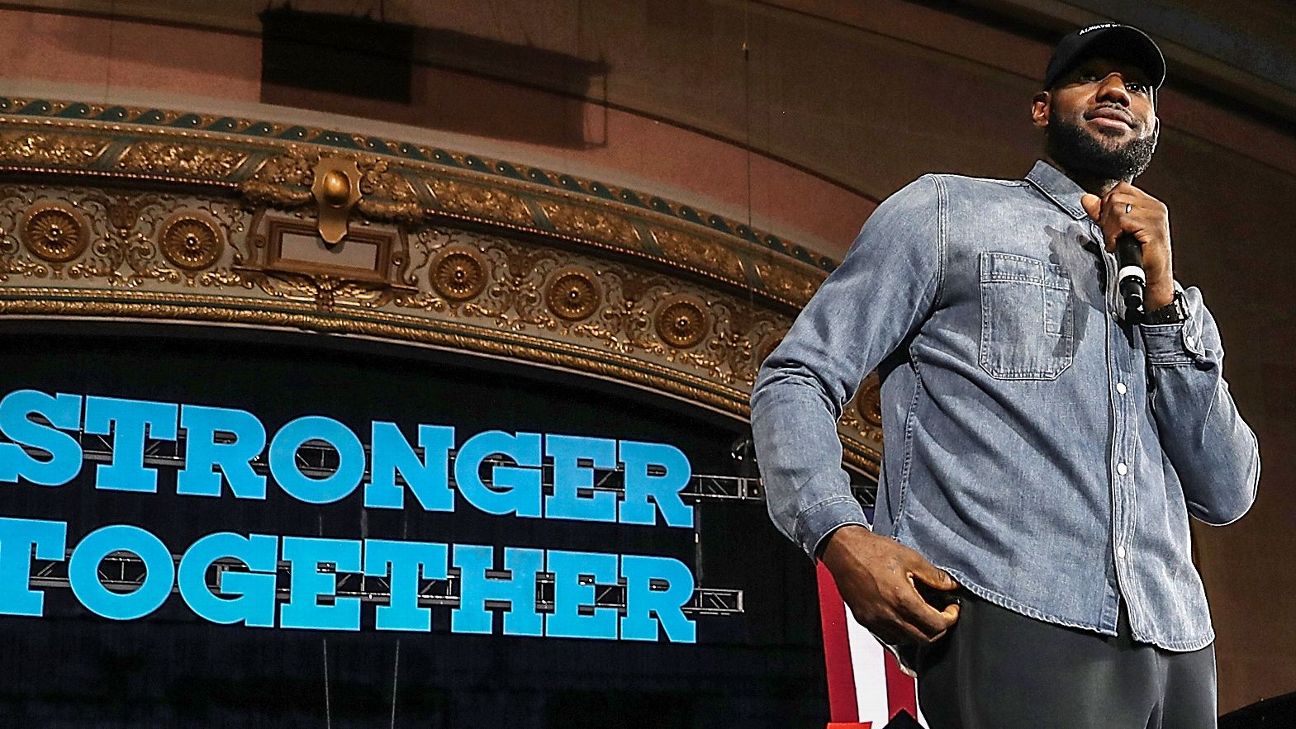 TO HIS TEAMMATES, Malcolm Brogdon is known as "The President" for his measured, Barack Obama-like cadence and physical resemblance to the 44th president.

The 25-year-old Milwaukee Bucks guard holds a master's degree in public policy from the University of Virginia, and he's as comfortable debating political issues as he is turning Giannis Antetokounmpo's passes into 3-pointers. Conversation can drift from voter ID laws in Wisconsin to the contentious governor's race in his home state of Georgia to LeBron James' influential activism.

"Policy is the way you can change the world," Brogdon says. "Our politics have become very polarized in the past two elections."

The history of the NBA is dotted with player activism: Kareem Abdul-Jabbar, Oscar Robertson, Bill Russell and Craig Hodges were outspoken about civil rights. But perhaps the most popular player in modern history, Michael Jordan, was notably apolitical.

Since the 2016 presidential election, major NBA figures such as LeBron James, Steph Curry, Gregg Popovich and Steve Kerr have made their share of provocative political statements, but the league's relationship to politics is hardly limited to rhetoric and controversy. Behind the headlines lies a fundamental act: voting.

In the run-up to Election Day on Tuesday, the NBA community has joined the chorus of voices encouraging voter registration and turnout, appearing in public service videos, wearing "I am a voter" T-shirts and pins, and doing television interviews.

Kevin Durant, DeMarcus Cousins and Steve Nash had voter registration tables at their respective charity events in September and October. The New York Knicks had Hall of Fame player-turned-politician Bill Bradley speak to the team. Rookie Marvin Bagley III brought a group of students into the Sacramento Kings' locker room and talked to them about the importance of voting. New Orleans Pelicans coach Alvin Gentry discussed voting with his players at a practice. Brogdon broached the subject with teammates. Houston Rockets guard Chris Paul partnered with Michelle Obama's "When We All Vote" campaign to encourage citizens to vote. Some players have even hit the campaign trail, with Indiana Pacers guard Victor Oladipo speaking at a rally for Indiana senator Joe Donnelly.

"I don't think it's an overreaction to say there was a little bit of a wake-up call after the last election,"Chicago Bullscenter Robin Lopez says.

This year, for the first time, the NBA and NBPA partnered with RISE to Vote to bring voter registration tables to the Las Vegas Summer League and the Rookie Transition Program.

"Commissioner Adam Silver has really emphasized that the players should do their social duty, their civic duty to vote and to speak out,"Detroit Pistonscoach Dwane Casey says. "I think that's relatively new -- the last five to six years -- and I think it's great for the NBA to do that."

THE WARRIORS AREN'T just the NBA's most dominant team on the court. They're also among the league's political power brokers. Coach Steve Kerr has voiced his political opinions, particularly on gun-law reform, and Curry has appeared in voter advocacy commercials. President and Chief Operating Officer Rick Welts, a member of the 2018 Basketball Hall of Fame class, is a well-known proponent of LGBTQ rights. This top-down advocacy has helped shape a thoughtful and engaged locker room.

"Our guys are grown-ups. They understand how much power they wield," Kerr says. "Maybe the way they can make the biggest impact is encouraging people to vote because that's the only way things, I think, can really change in this country."

Golden State's longtime Finals nemesis -- LeBron James -- has emerged as another political heavyweight. He says he has been politically active since Obama ran for president in 2008. James campaigned with Hillary Clinton in Ohio ahead of the 2016 presidential election and wore a Beto O'Rourke hat to a game in San Antonio last month. It was purposeful that the first episode of James' docuseries, "Shut Up and Dribble," which examines athletes' roles in politics, premiered three days before the midterms.

"I don't do it to get credit," James says. "I don't do it for my peers to say I'm the reason [for their activism]. I do it because this is who I am. This is who I have become. But if it continues to raise awareness and give other guys the strength and the notion that what they speak about or what they believe is important and they feel like what they talk about will help other people, that's what it is all about.

At the Bucks' practice facility, Brogdon entertains the question of whether success on the court is required to be a statesman for a political cause. He pauses to consider before agreeing that it helps. He believes his 2017 Rookie of the Year award has given him a larger profile to talk more openly about issues.

On a larger scale, James' three championships, four MVP awards and stature in the NBA give him a voice and a platform. In turn, Brogdon and other players have credited the Lakers forward with making them more comfortable speaking out about issues off the court.

BROGDON GREW UP in a house that placed an emphasis on discussing politics. His mother, Jann Adams -- who holds a Ph.D. in clinical psychology and is an associate vice president at Morehouse College -- texts him articles about political races. The family is keeping a particularly close eye on Georgia's gubernatorial race between Secretary of State Brian Kemp and Stacey Abrams, who is attempting to become the first black female governor in U.S. history.

Brogdon was raised in Atlanta, which boasts one of the most robust black middle-class populations in the country. Moving to Milwaukee -- the most segregated of the 102 largest metropolitan cities in the country -- was an adjustment for him.

"This is a place where it is harder to make a difference than in Atlanta," Brogdon says. "It is challenging here to get black people voting, but I think it is so important."

Wisconsin is one of 34 states that require or request voters to produce identification at the polls. According to the National Conference of State Legislatures, stricter ID laws in states such as North Carolina, Georgia, Ohio and Wisconsin disproportionately affect minority voters. In the 2016 election, Wisconsin had its lowest voter turnout in 16 years, with predominantly black neighborhoods having some of the steepest declines.

Brogdon's teammateKhris Middletonvoted in Wisconsin for the first time this year. In the past, he voted in Detroit (where he played as a rookie) and South Carolina (his home state). To vote in Wisconsin, Middleton says he had to show two paid utility bills and an address in the state. He registered at the Brookfield Town Hall, and when he went to vote in person, he brought his passport -- a less common form of identification for lower-income people -- because his driver's license had a South Carolina address on it.

"My mom talks about it all the time," Middleton says of voter ID laws. "My mom and dad always encouraged me to get out there and vote. It is a right that we haven't had for the longest time."

Casey, the Pistons' coach, remembers when his black grandparents first obtained the right to vote, and he doesn't take the responsibility lightly.

"It was not too long ago that African-Americans didn't have that opportunity," he says.

Last season, 73.9 percent of NBA players were African-American, according to a study from the Institute for Diversity and Ethics. In the 2016 presidential election, the U.S. Census Bureau reported that just 61.4 percent of eligible voters went to the polls. Although that number is close to the 63.6 percent who said they voted in 2008, black voter turnout fell 7 percent. That trend is a driving reason that Clippers coach Doc Rivers has begun wearing an "I am a voter" pin on his suit jacket during games.

"I think we've lost the light on how hard it was just to be able to vote," he says. "It really upsets me. It's something we have to do. We have to register, and then we have to go vote."

DURANT, WHO NOTESthat he hasn't voted since the 2008 presidential election, says he has been more engaged during this election cycle than at any other point in his life.

"I didn't feel confident enough to vote in the last election," the Warriors' All-Star forward says. "I didn't feel like I'd be doing the right thing if I voted for either one of those candidates. So now I feel like it's a perfect time to let my voice be heard."

Multiple players say they had confidence issues like Durant, whether in their understanding of candidates or in the mechanics of the voter registration process. The majority of players interviewed play in one state and keep their primary residence in another. James, for example, now plays in Los Angeles but continues to vote in Ohio.

With the NBA's travel schedule, many players vote by absentee ballot. The Bulls' Lopez will vote in California, where he owns a home. His brother, Bucks center Brook Lopez, is registered in Florida. Philadelphia 76ers forward Wilson Chandler planned to vote by absentee ballot in Colorado, where he used to play for the Nuggets, because he couldn't get his driver's license changed to Pennsylvania quickly enough following an offseason trade. Until the final days of October, Brogdon was registered to vote in Wisconsin. After consulting with his family, he decided to vote in Georgia.

Some players have their agents or financial advisers assist them with voter registration. Others elect to do it on their own. The Warriors worked with Athletes Rock the Vote, a subsidiary of Rock the Vote -- a nonpartisan nonprofit -- to help players get registered. Elsa Collins, the wife of Warriors assistant coach Jarron Collins, sits on the advisory board.

"We live in a climate right now where even voting is a partisan activity, which it's not," Elsa Collins says. "It's your civic responsibility."

Collins brought some Rock the Vote staff to a Warriors practice.

Warriors forward Kevon Looney, who is originally from Wisconsin, says he didn't know how or in which state to register to vote in past elections. With help from Collins and Rock the Vote, both Looney and Durant successfully registered to vote in the midterms.

"I feel more comfortable," the 22-year-old Looney says. "Being a young guy coming from high school, you hear about voting, but you don't know how to do it or where you go because it's all new to you. I feel more confident, and I feel it's my duty as an American to go out there and vote."

That sentiment is encouraging to Brogdon, who believes NBA players serve as role models within the black community. "It's important that people see us voting and know that we're voting," he says.

Now, like the real politicians, Milwaukee's "president" must wait to see how the ballots are counted.