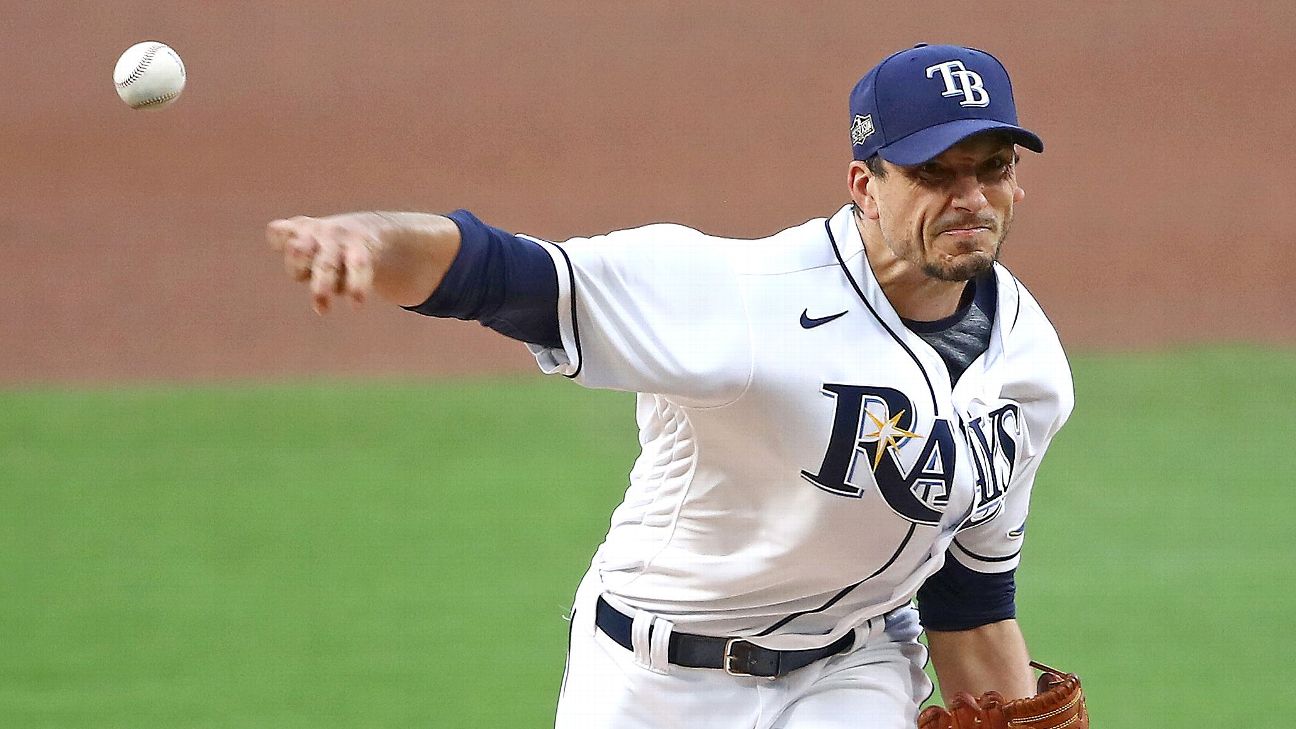 After all the oddities of the MLB regular season and postseason, the 2020 World Series pits baseball's top two teams against each other, which is something that doesn't happen every year. And while we've grown accustomed to seeing the Dodgers playing for the championship, this is the first Fall Classic for the Rays since 2008 and only the second in franchise history.

Here's what you need to know for Game 3 on Friday night, including a look at the pitching matchup, predictions, odds, other key numbers and more.

If you liked the thought of Clayton Kershaw going up against Tyler Glasnow in Game 1, then you're bound to get caught up in Game 3 when postseason stalwarts Walker Buehler and Charlie Morton take the mound. Perhaps that's not as enticing if it's midseason, but Morton, alone, has become must-watch October baseball. He sports a minuscule 0.57 ERA in this year's playoffs with an equally tiny 0.96 WHIP. Meanwhile, Buehler has pitched the second-most innings for the Dodgers behind Kershaw and comes in with a 1.89 playoff ERA. Runs could be at a premium with these two on the mound.

Players like to claim they treat every game the same -- whether that's in March, July or October. But we know that's not the case, and Morton has come close to admitting it. Even if he won't say it directly, his stuff speaks for itself. His fastball velocity is up 2 mph this month as compared to the first 60 games of the season, and his stuff is still going strong even in the later innings. That's not always easy for a 36-year-old, but perhaps the shorter season has allowed him to peak at the right time. Morton was on the 2017 Houston Astrosteam thatbeat the Dodgers in the World Series, pitching the final four innings in his team's Game 7 win. His playoff hero status has only gained steam since, considering his postseason ERA is 2.84 for his career, more than a run better than his regular-season number (4.08). In other words, the cliché applies: Morton steps up his game in a big way come October.

The Rays will need every bit of another great performance from their right-hander because looming one day later is the dreaded bullpen game for them. That didn't work out too well for the Dodgers in Game 2, so bagging a Game 3 win seems like another necessity for Tampa Bay because there are simply no guarantees on how Game 4 will go on the mound. For the moment, the Dodgers can view their Game 2 loss as a speed bump. Their pitching is set up over the next three days -- but they need to get to Morton first. Few have so far. -- Jesse Rogers

Rogers:The Rays need a win in Game 3 in a bad way because there's little chance their bullpen game the next day will keep the vaunted Dodgers offense in check. Having said that, Charlie Morton will prove to be human, which means Walker Buehler doesn't have to be perfect, just good enough to keep his team in the game. He'll do that while the Dodgers tack on some runs in a game that could mirror Game 1: close early but not so much late. Dodgers 7, Rays 3.

Alden Gonzalez:Even on a night when they were no-hit through the first four innings and didn't have anyone lined up to pitch for them, the Dodgers made it close toward the end of Game 2. Their offense has done a nice job grinding out at-bats and not chasing home runs in such a spacious ballpark. For Game 3, all of the Dodgers' high-leverage relievers will be well rested. And their starting pitcher, Buehler, is finally starting to display his dominant form at the tail end of a weird season. It'll be just enough to beat a very tough Morton. Dodgers 4, Rays 2.

Dan Mullen:First, let's embrace that Game 3 can be billed as Walker Buehler vs. Charlie Morton. Two name-brand starting pitchers. That sure makes predicting what might happen a lot easier than trying to predetermine what route Dave Roberts and Kevin Cash might do with each inning after their initial out-getter leaves.

The only problem? Both of these guys are really good, and both of these guys are built for big moments like a pivotal World Series game, so I expect a low-scoring matchup won by one key late-game hit. You know who is due for a moment like that?Justin Turner.You heard it here first: JT with an eighth-inning RBI double to give the Dodgers a 2-1 series lead.Dodgers 3, Rays 2.

Morton's 0.70 ERA through his first five postseason starts with the Rays is the lowest by a pitcher in his first five starts for a single team since -- wait for it -- earned run average became an official stat in both leagues in 1913, according to Elias. In other words: the lowest ever.


If he keeps rolling Friday, Morton could become just the second pitcher in MLB history to win each of his first six postseason starts with a single team, joining a guy you might have heard of if you've ever been to Cooperstown:New York YankeesHall of Famer Lefty Gomez.

Cody Bellinger managed to one-up ... Cody Bellinger. The Dodgers outfielder had held this crown since he robbed Fernando Tatis Jr. of a home run in a thrilling Dodgers-PadresNL Division Series Game 2, but his NLCS-deciding Game 7 home run to put Los Angeles in the 2020 World Series was just enough to take over the top spot.

Randy Arozarena has gone from an unknown outfielder to this October's breakout star. Going into the playoffs, you might have been asking, "Who is this guy?" But the Rays' trade for him has been a huge factor in their postseason run. And while his MLB-high seven long balls havemade a big impression, Arozarena also leads all hitters in the postseason with 47 total bases (and is leading in hits and tied for the lead in runs). Also, he has been flashing some leather in the outfield and some sweet celebration dance moves on the field. 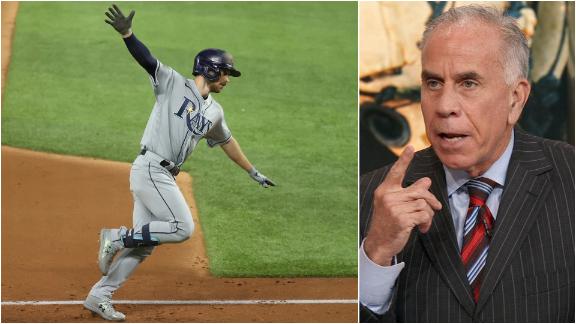 How Brandon Lowe saved the Rays' season
The Baseball Tonight crew takes an in-depth look at Brandon Lowe's pair of opposite-field home runs in Game 2 and how they changed the momentum of the World Series. 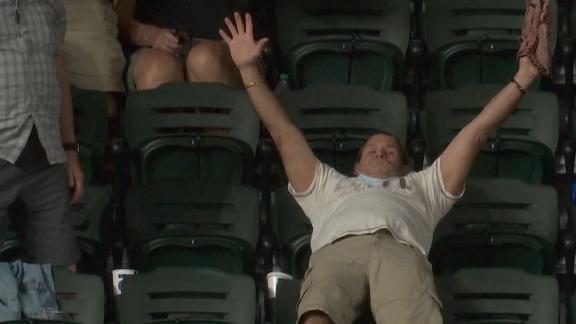