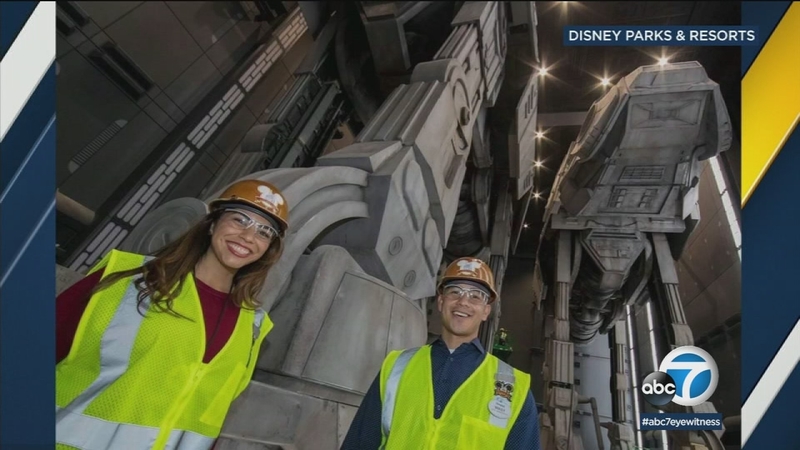 Photos posted to Twitter show Disneyland Ambassadors with two massive AT-ATs, looking like they were right out of the movies.

"I did not know it was going to be movie size, it's just so awesome," Jaylen Thomas, 10, said.

The resort also announced changes for annual passholders as they prepare for the massive crowds the new land will bring. For the first time, some annual passes will have two blackout calendars.

Depending on the day, certain APs may only have access to Disneyland or Disney California Adventure, not both like now. The program starts next June.

A spokesperson said it's to better manage the guest experience at the resort.

"We've always come here with my family and now I bring my daughter," said Marissa Salcedo, an AP from San Diego. "Now, we're thinking about upgrading our pass, so we're not always blacked out, which is kind of a bummer because it's really pricey."

This weekend was also the last for the ESPN Zone in Downtown Disney. It is just one of several businesses that will close this month to make room for a new hotel set to break ground later this summer.

"It's unfortunate because it's good to have a variety of places to eat and to drink and just sit down, but I can understand how a new hotel would bring more people to stay," said James Potts, visiting from Australia.

A spokesperson said employees are being offered jobs elsewhere at the resort.

David Koenig has written several books about Disneyland and said all these changes will help with capacity and will freshen up the park.

"I usually don't like a lot of changes at Disneyland, but this I'm excited to see," Koenig said. "Because things will be so different while trying to preserve what makes Disney, Disney."