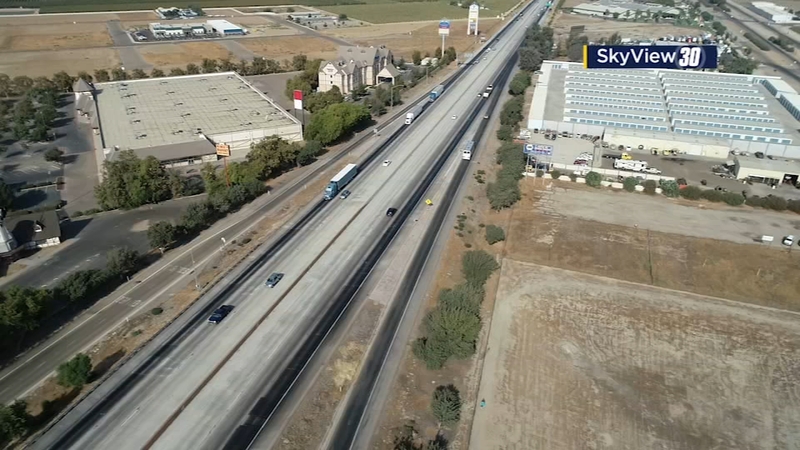 FRESNO, Calif. (KFSN) -- Proposed funding cuts affecting expansion projects on Highway 99 have Central Valley politicians riled up.
Caltrans has proposed at least delaying and possibly canceling a couple of projects along the highway -- in Madera and Tulare Counties.

Construction projects dot Highway 99 in the Valley -- from improvements to bridges and overpasses funded by almost 18 cents a gallon in gas taxes added since November 2017, to an expansion in Madera County between Avenues 12 and 17.

But another expansion between 12 and 7 is one of two Valley projects on which the state transportation agency is hitting the brakes.

"We are outraged by that decision," said Madera County Supervisor Rob Poythress.

The state is saving $9 million on the Madera County project this year and $8 million more by deleting a Tulare County project from this year's plans, but local politicians say the agency didn't consult them about canceling plans they made with the agency a year ago. (Caltrans officials emphasized they could resume these projects next year, but admitted that's no guarantee.)

"It's unacceptable to delay improvements to SR-99 and to this corridor, which quite frankly hauls more freight than the entire state of Texas," said Assm. Devon Mathis, (R) Visalia.

"This is classic bait and switch," the Republican said. "We were promised streets and roads and highways. We're getting anything but."

The Caltrans ITIP budget sets aside about one-tenth of its 2020 total, $61 million, for rail and other projects fitting into the executive order, which also calls for using discretionary transportation money to support housing close to available jobs, and helping lower income people pay for any increases in transportation costs.

But CalSTA secretary David Kim, whose agency includes Caltrans, told Action News it's not SB-1 gas tax money. Their more than $600 million ITIP budget includes about $400 million for roads. It gets an estimated $200 million from SB-1 revenue, according to Patterson's office. But Caltrans says the decision to delay Valley projects came before the executive order.

"What kind of a response is that?" Poythress said of Kim's statement about new thinking. "I mean, it's kind of like, do we all need to go to re-education camps or something? It's just unbelievable."

Poythress and Mathis complained about the proposed deletions to the state transportation commission at a hearing on Tuesday in Modesto.

The commission only has one more public hearing -- in Irvine next week -- but Patterson is asking them to hold one in Fresno before they vote on the spending plan.
Report a correction or typo
Related topics:
trafficgas pricestaxesconstructionpoliticshighway 99traffichighwayscalifornia
Copyright © 2021 KFSN-TV. All Rights Reserved.
HIGHWAY 99
Driver dies after being thrown from truck in Merced County
Truck driver killed after big rig overturns in Atwater
Pedestrian hit and killed on Highway 99 in northwest Fresno
Reedley woman killed in crash with semi-truck on Hwy 99
TOP STORIES
Man shot multiple times at party in southwest Fresno
Cyber Monday 2021 deals shopping guide
Fauci says omicron variant will 'inevitably' arrive in US
Valley health officials bracing for arrival of new COVID-19 variant
Fresno police share tips for protecting your packages
Pedestrian hit and killed in Clovis
Is it ever too early to put up a Christmas tree?
Show More
Fresno Co. man accused of stabbing his mother, killing her boyfriend
Fresno State student killed in early morning crash on highway
Boy life-flighted after being shot in Tulare County, deputies say
1 killed, 1 hospitalized after stabbing in Auberry, deputies say
What is omicron? What to know about new COVID variant
More TOP STORIES News