Burglary at KJE Tiny Homes brings business to a halt 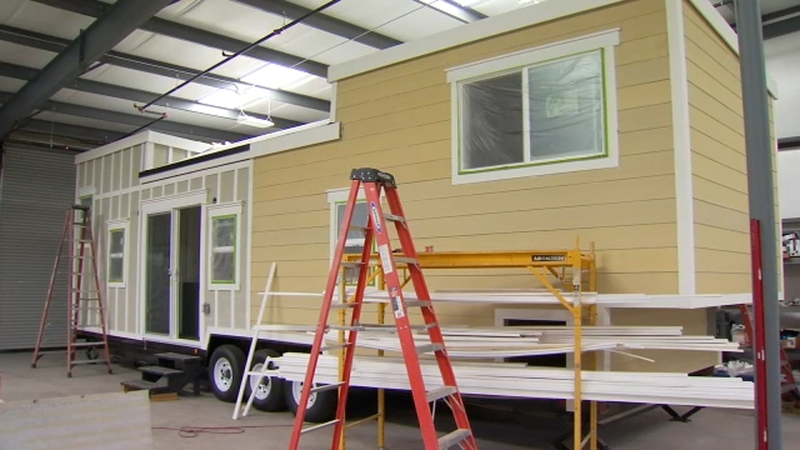 Burglary at KJE Tiny Homes brings business to a halt

FRESNO, Calif. (KFSN) -- Early morning burglars made off with thousands of dollars worth of tools from a locally owned business.

The loss has halted work at KJE Tiny Homes, which specializes in alternative living properties.

"It sucks because you put a lot of countless hard hours in, you work your butt off and then people just come swipe your stuff like it's nothing," said Supervisor Jason Englebright.

Boards were going up over the window that was shattered early Sunday morning.

The owners say surveillance video from across the street showed a white work-style truck pull up to the front door.

They say the passenger got out and threw a rock through a window.

"They unlatched the window, slid it open, came up and over and then walked over and opened the door for the other person who was waiting outside," Englebright said.

Two chop saws, each worth hundreds of dollars, were stripped off the work spaces and dozens of tools were taken.

"We had a full table of Milwaukee power tools. There was over $15,000 of them. They were right here." Englebright said. "I mean, they took everything."

Englebright says they just moved in to the 10,000 square foot shop a week ago with hopes to expand.

But after having so many tools taken, work was put on pause and employees were asked to stay home Monday.

Now, they're waiting to see if insurance will cover the loss.

"Worked a lot of hard years to get what I have and for someone to come in and steal it? It sucks," Englebright said.

The Fresno Police Department is investigating the burglary.

Most of the tools taken from the shop have the initials "KJE" on them. The owners are hoping they'll be able to recover at least some of them.

"We hope that people can, you know, keep their eyes out and find that person and turn them in," Englebright said.

The owners have decided to hire security for the next few nights until they come up with a long-term security plan.

Anyone with information about the burglary, or if you see any of those tools for sale, you're asked to contact Fresno Police.
Report a correction or typo
Related topics:
fresnorobberytiny house
Copyright © 2022 KFSN-TV. All Rights Reserved.
TOP STORIES
Tax refunds for CA: Here's what's included in new relief package
3 dead, at least 50 injured after Amtrak train derails in Missouri
Abortion protections to be on California ballot in fall
Target, Walmart weigh paying you not to bring back unwanted items
Nelson Esparza dropping defamation lawsuit against Garry Bredefeld
Visalia police searching for missing 72-year-old woman
Man killed in early morning shooting in Atwater, police say
Show More
Explosion at popular Fresno food truck injures 2, including minor
Lake Kaweah updates 'no wake zone' after dock failure caused by storms
Fowler Ave. from Olive to Clinton to be closed until September
SCOTUS sides with football coach who wanted to pray on the field
Tips to keep your dogs safe during Valley triple-digit heat
More TOP STORIES News