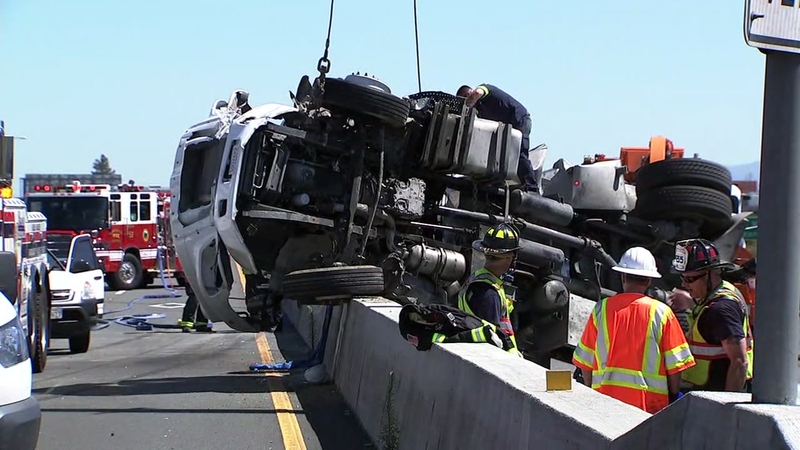 REDWOOD CITY, Calif. -- There are major traffic delays in the South Bay after a truck overturned, spilling 1,000 gallons of sewage, partially onto Highway 101, according to Redwood City CHP.

Police reported the incident at 12:56 p.m. They say a NorCal sanitary truck was traveling in lane 5 of northbound 101, just south of the San Antonio off-ramp, when a black sedan cut off the truck to exit.

#BREAKING: Sewage spill on NB 101 near San Antonio Rd on the Mountain View/Palo Alto border. Truck was carrying approx. 1,000 gallons of human waste. Small portion spilled onto the hwy, per CHP. CalTrans now working to empty the truck to get it upright. Massive traffic delays. https://t.co/Pp08mpCqXh

The truck then veered right, hit the barrier on the right shoulder, and lost control, CHP said.

After losing control the truck veered left across all lanes and hit a white sedan in lane 1, then hit the center median wall and overturned, landing mostly on southbound lanes.

About 1,000 gallons of human waste spilled into the roadway.

"We have blocked the #4 SB lane in order to allow the tow truck to maneuver and upright the truck," CHP said.

Only lane 5 of southbound Highway 101 is open at this time. Southbound traffic is backed up into Menlo Park.

Several lanes of the northbound direction are also closed. Traffic on that side is backed up into Mountain View.

CHP says to avoid the area, warning that, "If you don't have to be on US-101 SB avoid the area or you may be stuck in heavy traffic."

Traffic nightmare in the South Bay due to a sewage spill/ax on NB 101. Very slow going. Traffic is backed up southbound into Menlo Park and northbound into Mountain View. It’s going to take a long time for road conditions to recover from this. Take 280, if possible. #ABC7Now pic.twitter.com/NpeaEqdj2G

Avoid the area, unknown ETO and it might be very stinky in the area 💩 pic.twitter.com/LycOZrlUE5

Preliminary: NorCal sanitary truck was traveling NB in # 5 lane jist south of San Antonio Offramp when a blk sedan in # 3 lane attempts to take the offramp and cuts off the truck. Truck veers right, hits attenuators on right shoulder and loses control.

Continued: After losing control, truck veers left across all lanes and strikes a white sedan traveling NB on the #1 lane, then hits center median wall and overturns landing mostly on SB lanes. It's a miracle no one on SB side was hit as well as there were no injuries reported. pic.twitter.com/aMQQ8gYJpd

We have blocked the #4 SB lane in order to allow the tow truck to maneuver and upright the truck. Only #5 lane open. If you don't have to be on US-101 SB avoid the area or you may be stuck in heavy traffic pic.twitter.com/qu0L4aMuJg