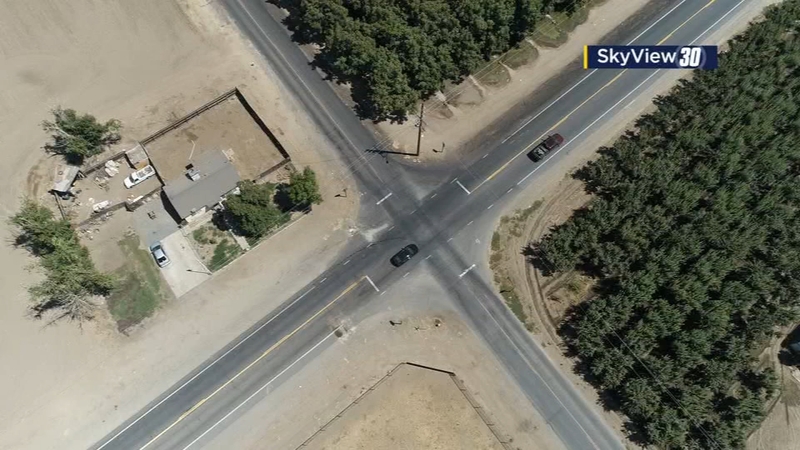 TULARE COUNTY, Calif. (KFSN) -- Since a four-way stop was installed two months ago, the California Highway Patrol says there have only been two crashes at the intersection of Avenue 256 and Road 124 (also known as Oakdale and Oakmore).

It's a major improvement from before the change-when the CHP and Tulare County Roads Department identified the corner as one of the more dangerous in the county.

Unfortunately, one of those two crashes ended in tragedy.

Last Wednesday evening, the CHP says a woman from Bakersfield was likely speeding when she blew a stop sign at the intersection, slamming into a car carrying a Visalia family.

On Saturday, August 10, ten-year-old Francine Salazar died from her injuries in the crash.

The driver who failed to stop has not yet been arrested or charged with a crime.

"Our investigators have been talking to her, and she's been very cooperative, feels terrible as you can imagine," said CHP Officer Steve Beal. "She's not from the area, not familiar with the area, so I don't think that the new traffic pattern had anything to do with her missing the stop sign. I think it was just a matter of not noticing the stop sign."

But there are those drivers who simply miss the new signs.

SkyView 30 caught a couple of offenders on Tuesday.

"Oftentimes we see people just blowing right through these stop signs at speed," Beal said. "And when they're stopped, the typical excuse is, 'I had no idea there was a stop sign there. I've been driving this road for x amount of years.'"

They even checked in after last week's crash, asking if there's anything else they can do to make the intersection safer.

The CHP says it's too early to say if any additional changes will be made at the intersection.