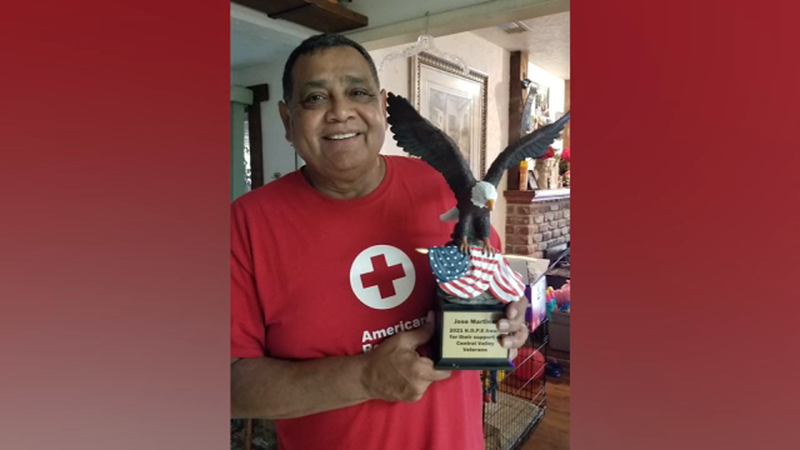 Local Vietnam veteran aims to help others through volunteer work

FRESNO, Calif. (KFSN) -- As thousands lined the streets of downtown Fresno Thursday to honor military veterans, a Vietnam veteran rode in the parade as part of the Red Cross.

He's dedicated his life to giving back to others and supporting other veterans.

On any given day, you can find Navy Veteran Jose Martinez along with his twin brother, John, and his friends helping others.

They are all volunteers for the Red Cross.

"It's kind of the ideal situation for a retired person," Martinez said.

They're also all military veterans.

Martinez followed his twin brother, a marine, into the military.

Martinez served in the U.S. Navy from 1971 to 1975 as an Aviation Machinist Mate Second Class and worked the flight deck as a troubleshooter on the U.S.S. Oriskany in the Vietnam War.

After returning home, Martinez tried to work in sales before, once again, following in his brother's footsteps, becoming a firefighter.

While working for the Modesto Fire Department, he decided to volunteer with the red cross when Hurricane Katrina hit Louisiana.

He said a poignant memory from his military days led him to do so.

"We were both overseas when my father passed away and the red cross made the arrangements to bring us home," said Martinez.

Martinez retired from the fire department after injuring his shoulder.

For the last four years, he's used his skills as a Navy veteran and firefighter to continue to volunteer with the Red Cross.

"It has become a real.... fulfilling. It's a real fulfilling feeling for myself," said Martinez.

He takes pride in helping veterans get access to resources, a hot meal and a place to stay.

Over the weekend, he was given the Heart of Philanthropy Embraced Award from the non-profit Central Valley Veterans for his service to the Red Cross.

Thursday, as he cruised through the Veteran's Day parade with Red Cross Volunteers. He said it was, in part, a way to honor those who have served, especially those who have died for our country.

Martinez is encouraging other veterans to consider volunteering with the Red Cross.