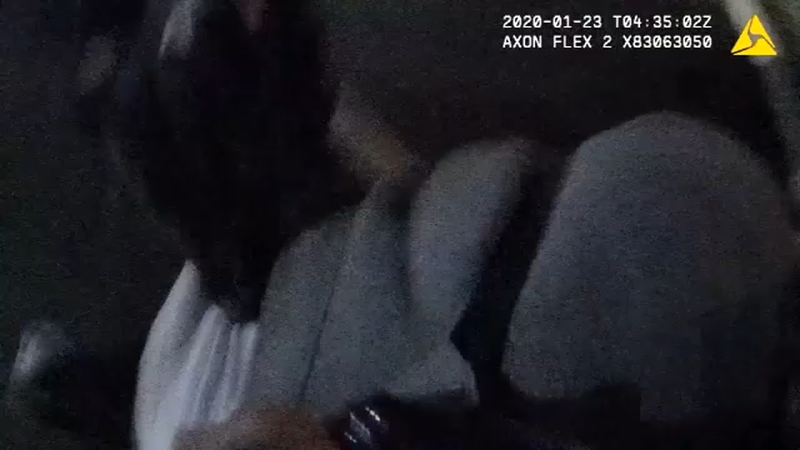 VISALIA, Calif. (KFSN) -- A Visalia man who was bitten by a police K-9 during his arrest has filed a federal civil rights lawsuit against the City of Visalia and several of its police officers.

"There was no violence, there were no threats, there was no attempt to flee, in fact, there wasn't even a crime committed," says V. James DeSimone, the attorney representing Raymundo Rubio said during a virtual press conference Monday.

DeSimone released edited body camera video of Rubio being bitten by a Visalia Police K-9 and arrested in January of 2020.

He says Rubio was walking in the Save Mart parking lot at Walnut and Akers Streets when Visalia Police Officer Marisa Burkdoll approached him.

Rubio told officers he didn't do anything as Officer Hansen tells Rubio to relax or he will let the dog out and it will bite him.

"No commands are issued to Mr. Rubio," DeSimone said. "He's not told to put his hands somewhere where he can comply and told what he has to do to avoid this. Instead, Officer Hansen makes it completely clear to him what he intends to do. 'I'm telling you right now, you're going to get bit.'"

DeSimone says Officer Burkdoll then escalates the situation by taking Rubio down to the ground. He says the video shows his client following commands and turning onto his stomach as Officer Hansen instructs the dog to bite.

The dog bites Rubio for one minute and 40 seconds as Officer Burkdoll handcuffs him.

Rubio was arrested and charged with felony resisting arrest and misdemeanor possession of a controlled substance.

According to the Visalia Police Department, Rubio also tested positive for meth when he was taken to the hospital following his arrest.

DeSimone said the use of force on his client was unnecessary. "These two police officers could've easily handcuffed the compliant, Raymundo Rubio, if they had given him proper commands and time to comply."

DeSimone says Rubio now suffers from headaches, back pain and emotional distress from the incident.

He filed a lawsuit in federal court Monday against the City of Visalia, the two officers involved and the Chief of Police, Jason Salazar.

DeSimone is also asking the State Attorney General's office to open an investigation into Visalia PD, saying there is a pattern of misconduct.

The Visalia Police Department did not respond to the accusations of misconduct, and could not elaborate on the case involving Rubio because of the pending litigation, but said in part that officers were trying to detain Rubio to check for weapons when he resisted.

"Ultimately, officers used physical force to attempt to detain Rubio and gave him commands to comply or the police K9 would be utilized. Rubio continued to resist their efforts to detain him and ultimately was taken into custody with the assistance of the police K9," said Sgt. Celestina Sanchez with the Visalia Police Department.