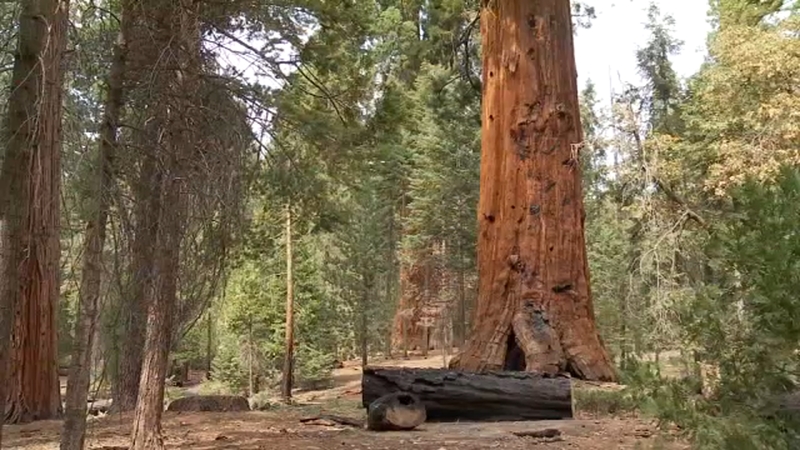 TULARE COUNTY, Calif. (KFSN) -- The Windy Fire has posed an ongoing threat to the Giant Sequoias in the Sequoia National Forest.

As flames crept toward the Trail of 100 Giants in recent weeks, it was all hands on deck to save the historic trees.

Trees are bare-boned and hot spots are still burning where the Windy fire raced through the Sequoia National Forest.

About 15 minutes away, the beloved Trail of 100 Giants is still closed to the public, but mostly unscathed.

"This is an island of survival in a sea of desolation all the way around here. This area has been shown to be managed correctly," said Jeff Shelton a Fire Behavior Analyst.

As the flames moved in, crews set up sprinklers at the base of the Giant Sequoias to moisten the ground around them.

They didn't, however, put aluminized structure wrap around them, as we saw in some other areas.

For more than a decade, forest management crews have been clearing out heavy fuels, including dead trees hit by bark beetles.

"The fuels work that basically took this larger fuel and we reduced it down to fuel that is more favorable for the firefighter to get into the area to put -- extinguish the fire," said Ernie Villa the Operations Section Chief.

You can see piles of ash on the ground where some of that previous work was done. Crews try to clear out about 20 feet around the Giant Sequoias so that when a major fire, like the Windy Fire, moves in, the heat is less intense.

"Without this, my professional opinion would be that we would probably see a lot more loss of Giant Sequoia trees in this grove," said Villa.

While the majority of the Long Meadow Grove was virtually untouched, the canopy of one Giant Sequoia caught on fire from an ember from the Windy Fire.

Aircraft were able to drop water on top of it and then specialized climbers moved in to completely extinguish the fire inside.

"That's over half the groves that have been impacted by fire in two years. That has never happened before. We have never seen these effects," said Teresa Benson the Forest Supervisor for the Sequoia National Forest.

Because of the damage, the Sequoia Coalition was created.

The group of forest experts come up with long-term plans for climate change, focus on the resilience of the giants and determine the pace and scale of fuel treatments.

"We want to make sure that these trees are here for the future, for the children and the grandchild to be able to enjoy these trees just like we have," Benson said.