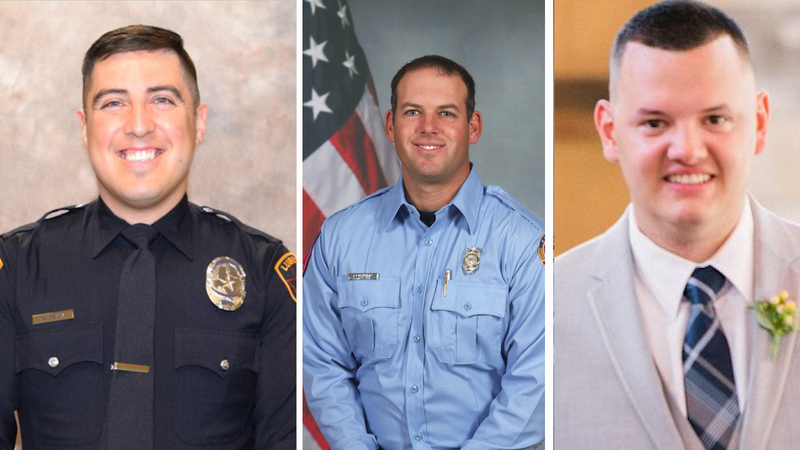 LUBBOCK, Texas -- Two Lubbock first responders are dead, and one is in critical condition after responding to several traffic accidents related to road conditions Saturday morning.

The Lubbock Fire Department responded to a single-vehicle rollover accident around 8:19 a.m.

Officials say the vehicle was travelling southbound when it crossed over the median into the northbound lanes, and came to a rest.

They say at 8:36 a.m. police and fire officials arrived at the scene and began to work on the accident.

While working the accident, police say a second vehicle, travelling southbound, crossed over the median.

The second vehicle was carrying a trailer.

Authorities say the vehicle came to rest in the median about 25 to 50 yards south of the first accident that the emergency responders were still working on.

While working both accidents, police say a third vehicle travelling southbound crossed over into the median and struck two firefighters and one police officer.

They say the vehicle continued to travel, crossing over into the northbound lanes and coming to a rest after going into an embankment.

Around 8:50 a.m. the firefighters and police officers at the scene put out an emergency call requesting additional emergency personnel.

Today our hearts mourn for the losses and critical injuries experienced by our Lubbock First Responder Family.

27-year-old Officer Nicholas Reyna served with the Lubbock Police Department for one year. Following the academy, he served on patrol during the day shift. pic.twitter.com/0gCD3HpRFB

The Lubbock Police Department confirms a 27-year-old Nicholas Reyna, with just over a year of service with the department was pronounced dead at the scene.

Authorities say the two firefighters that were also struck were transported to the hospital.

39-year-old Lieutenant/Paramedic Eric Hill served with Lubbock Fire Rescue for ten years. Eric had promoted to lieutenant in July 2019 and was stationed at Fire Station 10B. pic.twitter.com/REyehcxqBe

Lubbock Fire Chief Shaun Fogerson confirms one firefighter was pronounced deceased at the hospital, while the other is in very critical condition.

The deceased firefighter was identified at 39-year-old lieutenant and paramedic Eric Hill. He served with the department for 10 years.

The firefighter in critical condition was identified as 30-year-old Matt Dawson. He has been with the department for five years.

The injured firefighter who remains in critical condition is 30-year-old Firefighter/Paramedic Matt Dawson. He has been with the department for five years. Matt Dawson is stationed at Fire Station 2A. pic.twitter.com/wnOY6FeUqw

Officials warned in a press conference that it is important to drive with caution when roads are wet and icy.