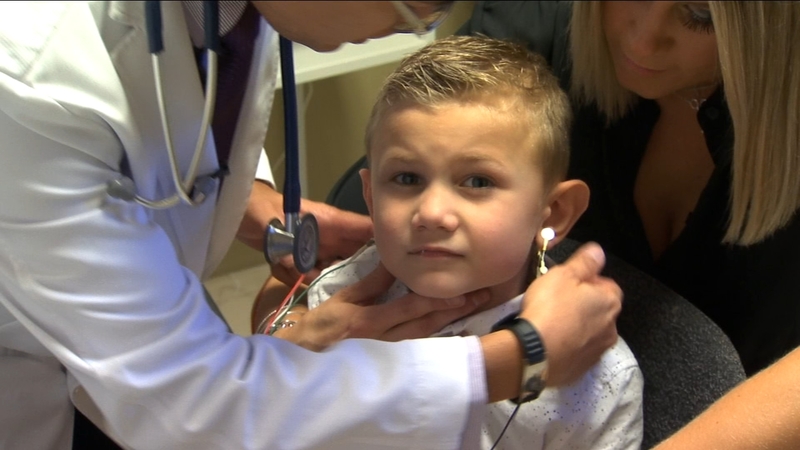 FRESNO, Calif. (KFSN) -- Four-year-old Hudson Mears has no trouble expressing his love for his mom, Shaine. But he can't put it into words.

The bright-eyed Clovis boy used to speak and even learned words early, at five months.

Shaine has a treasure of memories of her son who at first, reached milestones, easily.

But at 15 months, Hudson began to gradually lose his language skills, then lost himself in his own body.

"It's a complete life-changer. You go from having a very typical child," said Mears.

By age three, Hudson was diagnosed with autism and Shaine and her husband Brian, began a determined search for resources to help their son, but not with traditional therapies or medication.

Around the same time, Dr. Dennis Redubla came to the Valley from the Philippines after having successful results with non-verbal children across Asia, who are now able to speak, with the help of neuro-feedback.

In a painless process, sensors are placed on the patient to map the brain and find the areas which are underdeveloped or not functioning.

"Look at the brain, map out the brain, find out what's going on there and most often than not, you will find the answer," said Brain Center Director Dennis Redubla.

Brain-mapping identifies 21 specific sites, each responsible for a mental or physical function. Dr. Redubla says the mapping pinpoints which sites are deficient so treatment can be targeted to that site to improve or repair it.

Hudson's map shows the front part of his brain, responsible for speech and behavior, is underdeveloped.

Brain mapping is just part of Dr. Redubla's approach. It's used along with other factors such as the patient's diet, vitamin supplements and speech therapy, treating the patient as a whole instead of just their behaviors

"We are hoping that through neuro-rehabilitation, the brain can correct itself," said Dr. Redubla.

Chestnut Medical Group, won a grant from Johns Hopkins Medicine to bring Dr. Redubla to the brain center. It means Valley families no longer have to travel for neuro-feedback and rehabilitation for their child.

"Now we have this center here where we can spend any amount of time that the patient and their family needs to get to the bottom of it," said Chestnut Medical Group Internist Owner Dr. Uma Rao.

Hudson is already improving after a few sessions of treatment, renewing the hope, his mom and dad and every parent has for their child.

"He can live a life that makes him happy. I want him to not be trapped in his body," said Mears.

The new brain center at The Chestnut Medical Group in Northeast Fresno, can also help treat patients with ADHD, Alzheimer's and PTSD.