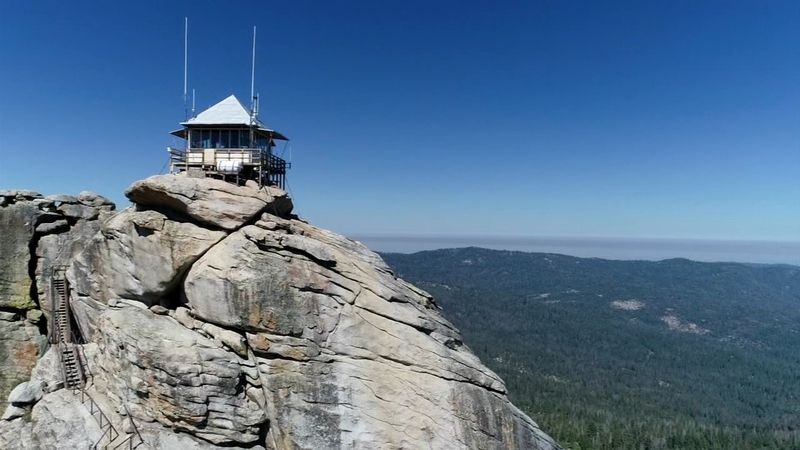 The rough fire is the 14th largest wildfire in California history, burning more than 151,000 acres.

Recently, Action News took you to the top of the Buck Rock Fire Lookout which played a vital role for firefighters in 2015, but the historic lookout was nearly lost to the wildfire.

Even after three years, the scars from the Rough Fire are still visible in the Sequoia National Forest and surrounding areas.

Video from SkyView 30 shows the dead and dying trees that are still standing.

A lightning strike sparked the flames, with the first smoke spotted at the Buck Rock Fire Lookout at 8,500 feet.

Time-lapse video from Buck Rock picked up that smoke, at first billowing through the mountains, but the flames would soon rage out of control.

Time-lapse video from Buck Rock shows the first smoke from the Rough Fire.

Kathy Allison spent sixteen seasons up at the lookout, working as a smoke spotter, and she vividly remembers the frightening and huge wildfire.

Allison recalls, "It was scary and I was sad to see the land that I've been trying to help protect, burn to the degree that it did."

Allison says the National Forest Service decided to evacuate the Buck Rock Fire Lookout during the Rough Fire because the heavy smoke made the lookout nearly useless, as well as having a negative impact on the health of the people working there.

Despite it towering over the forest, fears of flying hot embers forced the forest service to wrap the lookout in a fire-retardant material to protect it.

The wildfire took a run toward the gigantic slab of granite, and firefighters made a last stand at Buck Rock.

Marianne Emmendorfer with the Sequoia National Forest remembers, "We actually back-burned from the area of the lookout here and our fire met the fire coming up out of the canyon and that's why you have areas burned and much is left alive, and a mixed amount of live and dead trees."

The nearly century-old lookout at the top of Buck Rock survived, but the forest below had changed.

Emmendorfer says, "The fire cleared out a lot of the underbrush and some of the competing conifers and the Sequoias are re-generating like mad."

The Forest Service says nature has hit the reset button, but people, namely the Forest Service and their contractors are doing their part by cutting down the dead and dying trees that are a hazard to humans and various structures.