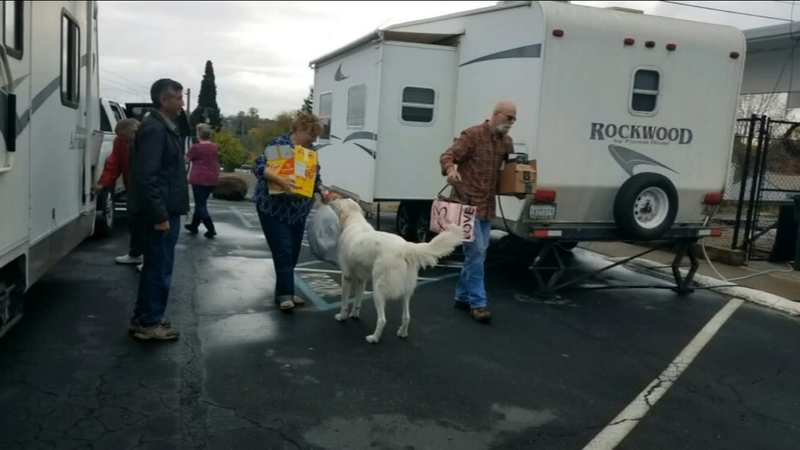 FRESNO, Calif. (KFSN) -- Showings of support, for the Camp Fire victims, have poured in from throughout the state.

A Central Valley family is in Butte County, with five trailers they are giving to families, to live in, while they work to rebuild.

Thirteen-thousand six hundred and seventy-two--that is how many families don't have a home to return to because of the Camp Fire.

Knowing the road to recovery will be a long one, a North Fork family is donating their time and trailers to provide shelter to those in need but the gesture is growing.

As more and more people find out they're quite literally joining the caravan to bring hope to fire victims.

A North Fork family is showing the power of prayer. Diane and Vince Mercado are caravanning to #ButteCounty to donate trailers to #campfire victims. It started with one, grew to five, and now they’re already planning their next caravan! How their story c… https://t.co/LUb7hVDNo9 pic.twitter.com/ykcVs36wsp

After the deadliest and most destructive wildfire in California's history ravaged through several Butte County communities. The journey to rebuild has only just begun.

"How do you even relate to that you're talking to these people praying and saying god what do I say."

Diane Mercado is speaking through her actions. She and her husband Vince are near Paradise with a caravan of 5 trailers to donate to families who lost everything.

Their first stop an elderly pastor and his wife who have been living in a Sunday School room after the Camp Fire destroyed their home.

"The wife was just sobbing she said I can't believe you guys are doing this," said Mercado.

The project all happened by chance while on a camping trip in Morro Bay.

The couple they were in an RV and expressed their need to downsize--so Diane suggested donating the trailer to fire victims.

"My friend her eyes just got real big they welled up with tears she said "Oh my God, Diane I have goosebumps. I'm going to donate my trailer," said Mercado.

Once back in North Fork, the pair decided any money they could get for their sailboat would go toward buying a trailer.

The only problem their ad for the vessel had been sitting on Craigslist unanswered for three months.

But the very next morning, without updating the post, a buyer from Morro Bay, where the idea was birthed, called them.

He drives to North Fork and hands over the $4,000 asking price.

Diane and Vince then attempt to buy a trailer and barter with the seller explaining the game plan. That seller not only agrees he ends up joining the caravan.

"When my husband and I tried to pay him they said no we don't want the money we just want to donate our trailer," said Mercado.

This is truly the gift that keeps giving. Diane and her husband say they will continue the caravans as long as there are trailers to bring.