Protesters said they are concerned that spending cuts could trickle down to local programs and leave many without a job.
KFSN
By Jason Oliveira 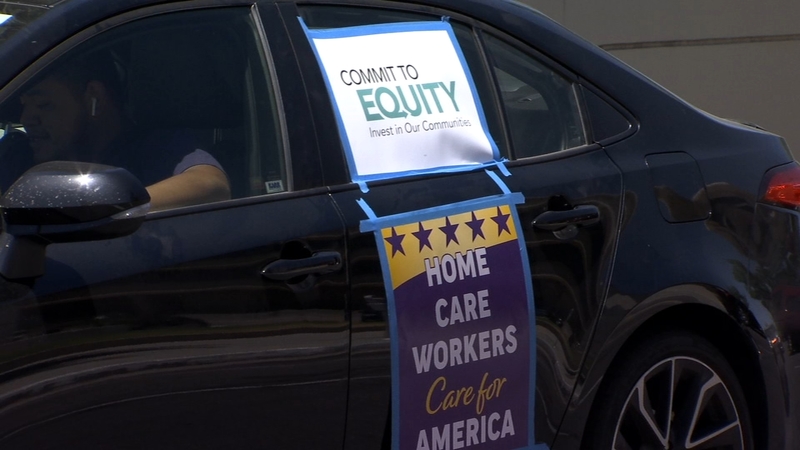 FRESNO, Calif. (KFSN) -- A downtown Fresno rally was organized on Tuesday to bring awareness to a $202 billion budget recently signed by the governor.

Protesters said they are concerned that spending cuts could trickle down to local programs and leave many without a job.

About 100 vehicles, most honking and colorfully decorated with positive messages, drove through downtown during the lunch hour.

The car rally caravan was made up mostly of frontline workers, teachers, and community advocates to protest state budget cuts and to demand state leaders invest in communities suffering from social injustice.

"Cuts to social service program, cuts to housing, cuts to schools, these are services that are relied upon by the community. These services are going to lead to workers that provide these services to lose jobs," said organizer Riley Talford.

On Monday, Governor Gavin Newsom signed a budget that aims to close the shortfall, in part by cutting billions of dollars in spending on state services and worker salaries.

"We know what happened last time during budget cuts, where there were cuts throughout. People lost homes, lost jobs, families broke apart., businesses vanished and never came back," said Talford.

Tuesday's rally was organized by the Commit to Equity program, with similar events held in other big cities across the state.

Protesters worry that the new budget may cut a number of programs that many families depend on, including health care and child care.

To help solve the budget crisis, protesters are calling on leaders in Sacramento to tax the privileged.