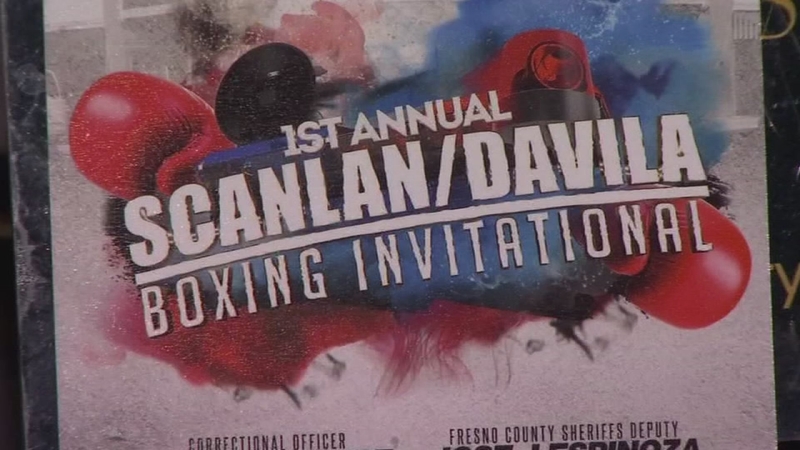 FRESNO, Calif. (KFSN) -- Its been almost two years since a gunman opened fire on two correctional officers at the Fresno County Jail.

In September 2016, Officer Malama Scanlan and Officer Juanita Davila worked what they didn't know would be their last shift at the jail. The gunshot wounds they suffered haven't allowed them to go back to work for the department.

Davila was shot in the jaw, and the most damage was done to Scanlan who was shot in the head and is still trying to recover. It was last reported in March he hasn't been able to walk, talk or eat on his own since the shooting.

"I'm just hoping for a good turnout people having fun a lot of law enforcement lately we've been getting a bad rep but were going to turn that around at least for one night and its all for a good cause."

Fresno County Sheriff's deputies, correctional officers, and Fresno Police officers will be putting on some boxing gloves and jumping in the ring, going against amateur boxers, or even each other.

Some have already been training for months ahead of the match.

One officer told us, "I've been working for the Fresno County Jail for almost three years now. Very excited to help out the community, the officers, and their children in this event. Been training hard and working hard and I'm definitely ready to get out there and give you guys a show."
Deputies say Scanlan is still in the hospital, hoping someday he'll be able to go home to his family.

"It's a tough battle every day for him, and we are always giving our prayers for him, and he's fighting the good fight," says Jamie.

The boxing fundraiser will be at the Tower Theater on July 28th.

The event will also have taco trucks, a bar, and a silent auction.

Tickets are on sale now on the theater's website.