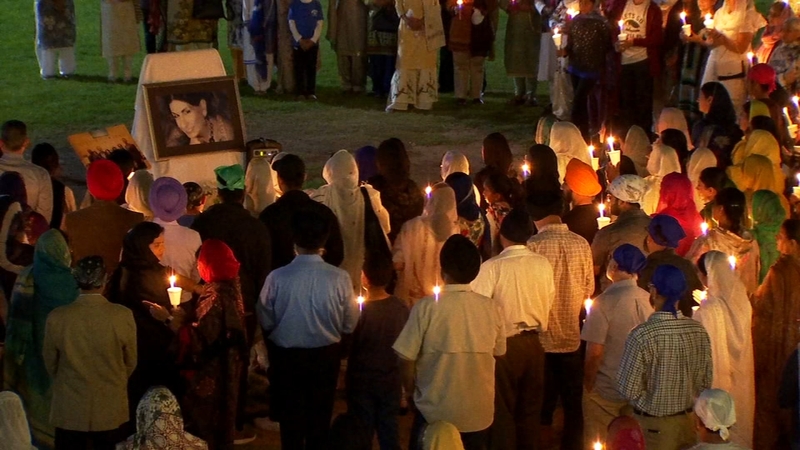 FRESNO, Calif. (KFSN) -- Lit candles circled the woman who touched the hearts of thousands in the Central Valley's Sikh community. One by one, they stepped front and center to honor Guddi Sidhu.

The 70-year-old tragically died after losing control of her car and crashing into a power pole in northwest Fresno Sunday.

"Your mom was the architect of our childhood," a participant said.

Her daughter says it's like the light of their universe went out.

"Your sun being gone from your solar system that's the only way I can describe," said Roopam Sidhu.

Guddi Sidhu was a local pioneer in the Sikh community, serving as the vice president of Fresno's Sikh Institute. She also hosted TV and radio and programs.

Roopam Sidhu says those were among her mother's passions and purpose.

"She had a vision and said I'm going to make sure the children of the central valley don't forget their roots," she said.

Those roots have grown for more than 30 years.
Gurpreet Mann was Sidhu's TV co-host for a good portion of that time. He watched her dreams manifest both during and after their show ended in 2012.

"Whatever she did she did it with humility and with a smile and she was the very first in the Sikh community through and she did everything with style, that's the biggest thing," he said.

Her best friend, whose name is also Guddi, echoes those same sentiments. She has a message for women walking in Sidhu's footsteps and to the man who allowed this loving trailblazer to create her own path.

"Let's fly like her the way she flew beyond all the boundaries beyond all her responsibility as a wife and I also want to acknowledge her husband who gave her that to fly," she said.

As people grieve a leader who led by example, Sidhu's daughter hopes everyone will always remember how her mom lived her life through service and contribution.

"My mom did it beautifully and that's what people loved about her they loved that about her," she said.