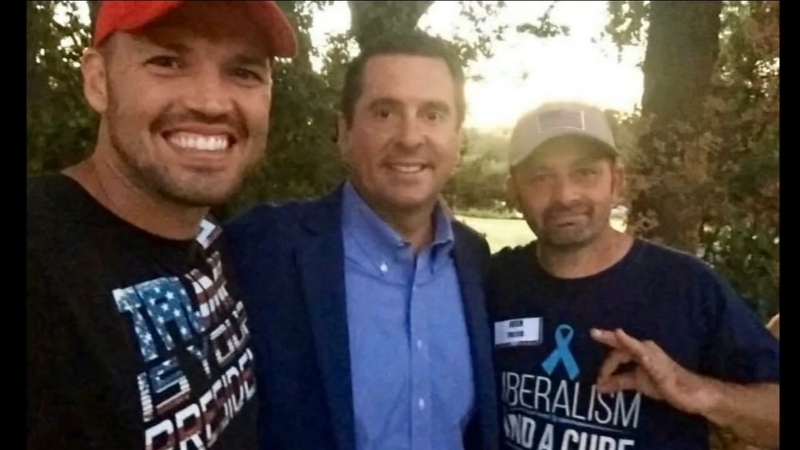 The selfie shows Nunes with two men at an event earlier this week, one of them is flashing a sign that some say signifies white power.

Bath, a Fresno teacher, says he's voted for Nunes many times before, but this year, he's supporting his Democratic Challenger, Andrew Janz.

So awesome to see my Congressmen Nunes taking pics with a guy flashing a white supremacist sign. This was at his “invite only” event. Retweet please. Nunes doesn’t represent us. @GVWire @JimVerros @MackenzieMays @wbender99 @EdKrassen @DanRather @maddow @CillizzaCNN @costareports pic.twitter.com/9eLvOSwKq3

"It's just very surprising, it's unsettling," Bath said about the picture. "This is who Devin Nunes hangs out with, and he's secluding and pulling himself away from everybody else. It bothers me."

The free meet and greet was held on Tuesday night at a home near the Kings River.

One of the co-hosts, Tal Cloud, said it was an outstanding event, other than the picture he was later made aware of.

"I am furious at myself for allowing this to become a distraction as I was unaware of the OK sign meant until last night when a neighbor showed me the picture online," Cloud said in a statement.

He's an ardent Trump supporter and the founder of an organization whose objective he says is to expose the left and raise the "Christian conservative remnant."

His friend, Josh Fulfer, is the one making the sign, which Bergquam says is not racist, but rather a symbol of the three percenters-an organization named after Minutemen in the revolutionary war.

"Anybody who says that Josh is a white nationalist or that anybody that I know that uses this stupid symbol. In reality, it's two fingers together-if that's your best argument for the opposition's campaign-to me it's just desperate," Bergquam said.

Apart from its traditional meaning that all is well, a recent Southern Poverty Law Center article says the ok sign might be an attempt to troll liberals or a covert way of signaling your presence to other white nationalists.

Whatever the intent was, Nunes' team wasn't bothered by it.