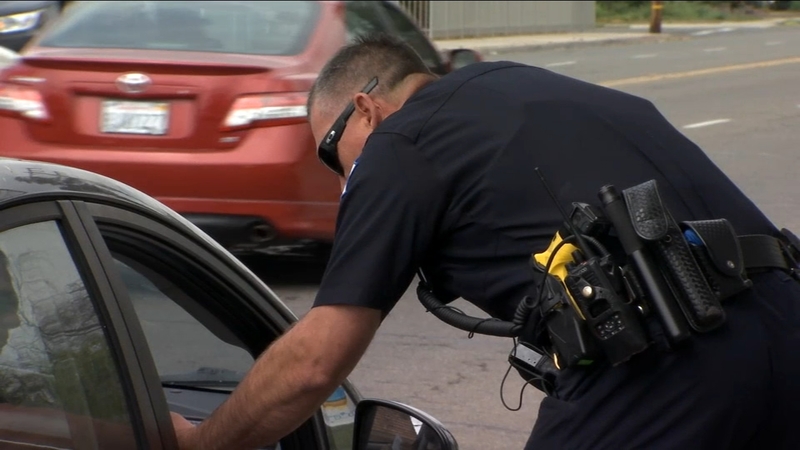 FRESNO, Calif. (KFSN) -- You may notice increased patrols during the month of April of officers looking for drivers on their cellphone.

Officials say texting and talking on cellphones has led to more accidents in recent years.

So every April police departments want to remind drivers about the dangers of using your phone when behind the wheel.

"Distracted driving is anything that basically takes your eyes off the road. It could be combing your hair, eating food, changing your clothes, putting on makeup," says Joe Ploharz of the Fresno Police Department.

But veteran officer Joe Plohorz was more focused on catching people using their cellphones behind the wheel Friday.

It's a problem that's become more dangerous than drunk driving, according to a recent study by AAA.

"In 2017 there was over 3,000 fatalities nationwide involving distracted driving," says Ploharz.

And it wasn't difficult to find drivers on their phones during Action News reporter Jason Oliveira's ridealong with Fresno PD.

If you're stopped for not obeying the hands-free driving laws, you can expect to pay about a $200 fine the first time you're ticketed.

"No one likes to be stopped. Tickets are expensive. But the best way we can do it is to educate people that we're not out just giving tickets to pay a fine, we want to educate you that it causes accidents," says Ploharz.

Your insurance rates could also skyrocket if you're found to be at fault and on your phone during an accident.

Officials suggest keeping your cell far away from you while behind the wheel if it's too much of a temptation.

"The best way to not cause an accident and not have your insurance go up and not get a ticket is put your phone in the backseat or let your passenger hold it and just drive and worry about yourself and your family," says Ploharz.