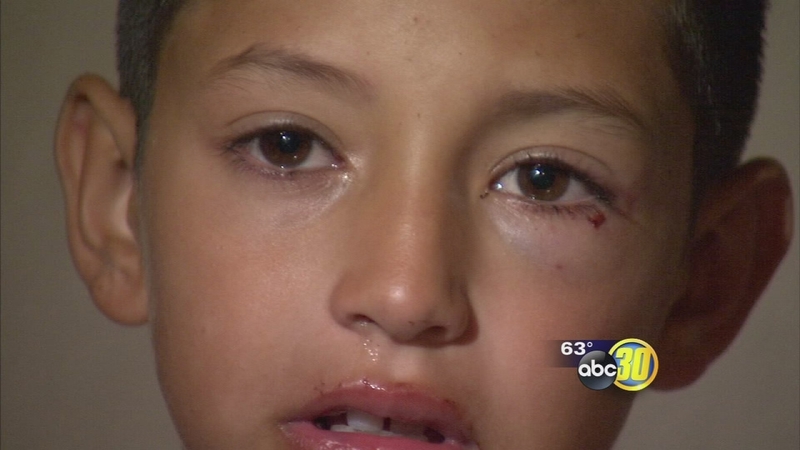 FRESNO, Calif. (KFSN) -- An 8-year-old boy who survived a vicious dog attack says he owes his life to a heroic bus driver.

Ricardo Carrillo made it home from the hospital in tears but still tough. He's recovering from the fight of his life, "I got scared and I literally thought I was gonna die." He was attacked by two german shepherds - the neighbor's dogs, he says, while he was walking to his friend's house in San Joaquin.

"I sacrificed myself for my friend," Carrillo said.

His friend ran away and left Ricardo all alone. The dogs bit his leg, his hand and his head, "I feel they could have killed me and nobody had to help me," Carrillo added.

It was the end of a school day. A bus full of kids had just pulled up and Ricardo says the driver jumped out with a baseball bat, "when the bus driver came, he told them to get out of here and a guy in a red truck also helped."

Deputies showed up moments later. The dogs ran home, they were contained in the yard but it wasn't enough to hold both of them back. Jake Jensen with the Fresno County Sheriff's Office said, "one of the dogs got out of the yard, came towards the deputy and got aggressive and he fired two shots, killing the dog."

The other dog was picked up by animal control and Ricardo was rushed to the hospital.

His sister, Ana Maldonado said, "it broke my heart, he looked at me with his big brown eyes, they were watering...it hurt."

Ricardo is still in pain but says his family is making it all go away, "they want me to feel good, strong and invincible and I love them."