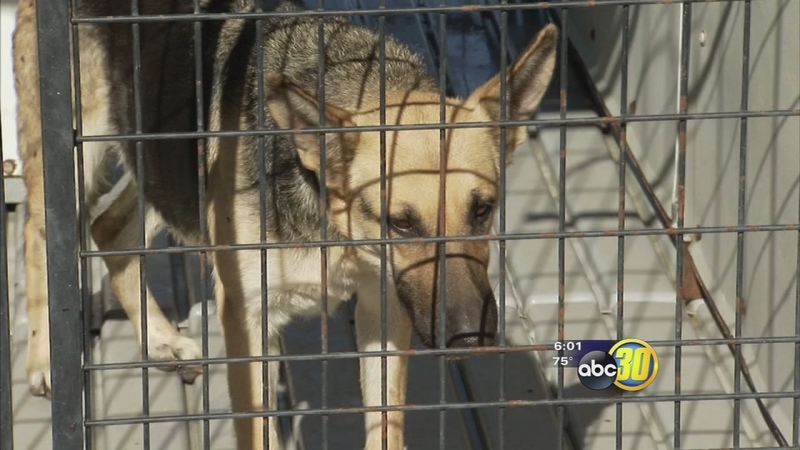 FRESNO, Calif. (KFSN) -- A San Joaquin man is apologizing for a German Shepherd attack that wounded an 8-year-old boy. He says his dogs got loose while he was out of town.

The boy is okay. He was rescued by a bus driver and a man in a red truck.

It is a dark day for a German Shepherd in San Joaquin. She's on death row -- alone in an unfamiliar place. "The dog knows, dogs have feelings too," said Chad McMullin, Fresno City manager, "you can't tell them why they're being held."

She's being held for a vicious attack on an 8-year-old boy. There won't be a jury or a trial. She's already been convicted and the owner has decided to give her up. "I just don't want to risk it, go through another situation," the owner said, "once the dog bites, it's gonna become more aggressive so I told them, don't wait for another chance."

The victim, Ricardo Carrillo, lives next door. His wounds are hidden beneath pajamas and he only had one word to say about his recovery, "good," Carrillo said. He was actually attacked by two dogs. They bit his leg, his arm and his head. A deputy put one down in the street but it was Ruben Mendoza, a school bus driver, who saved Carrillo with a tire thumper. Mendoza said, "It could have been any of our kids, could have been one of mine. So first thing that comes to mind, do something."

The owner of the dogs says it's now his turn to do the right thing, "It's frustrating cause I put myself in their shoes, I have kids and I'm really sorry."

The German Shepherds final days will be spent in a kennel and the owner says the city will put her down. "It's two dogs. But a human life, you can't replace," he said.

A loss on both sides. One person has to give up a pet and the other has to live with the scars.