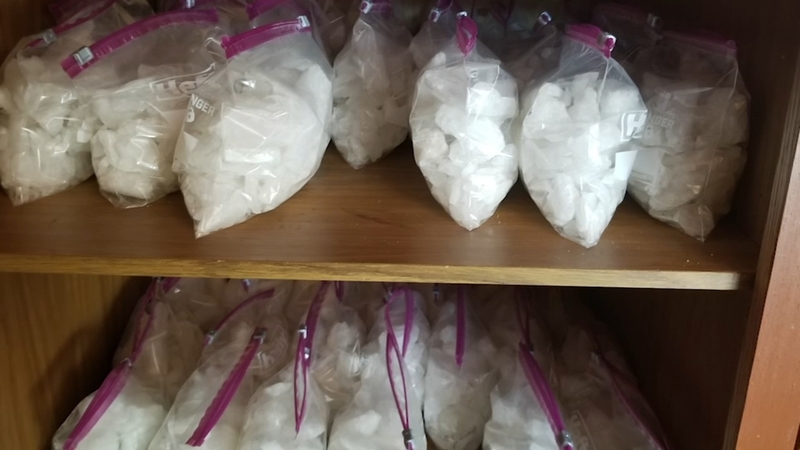 Federal investigators believe a Mexican drug cartel is behind an elaborate operation to make meth in the South Valley.

The suspects - Saul Ontiveros and Eduardo Garcia - face federal charges after deputies found several hundred pounds of both processed and liquid meth in their car.

The drugs have a street value of $1.5 million. Investigators believe the drugs were partially being processed in a Pixley home.

In the heart of Pixley, a Tulare County Sheriff's deputy pulled over a car in early January for not having a front license plate. But when the driver pulled over, the smell of marijuana was undeniable and the suspects, Saul Ontiveros and Eduardo Garcia were not very cooperative.

"They quickly exited the vehicle and tried to get into a house nearby. The deputy was able to contact both of them, detain them and learn that they were under the influence of something," said Tulare County Sheriff Mike Boudreaux.

While the deputy waited for additional officers, a criminal investigation began.

A search of the car turned up two large buckets with a liquid substance inside. Inside the trunk was another bucket with 49 pounds of meth.

Then officers searched the Pixley home the pair rented and found out it was a conversion lab where the liquid was intended to be transformed into a solid.

"We have 160 pounds of processed meth and 200 pounds of liquid meth that we fully anticipate would be converted in very short order to be sold on the streets of the Central Valley," said Eastern District of CA Attorney General Scott McGregor.

The investigation also led officers to Porterville. Right now, federal officials won't say whether the suspects were going back and forth to Mexico.

Based on what deputies recovered, federal officials say it confirms the new way meth is making its way into the United States, crossing borders only partially ready. It's in liquid form and less detectable. The last processes happen locally before it's sold.