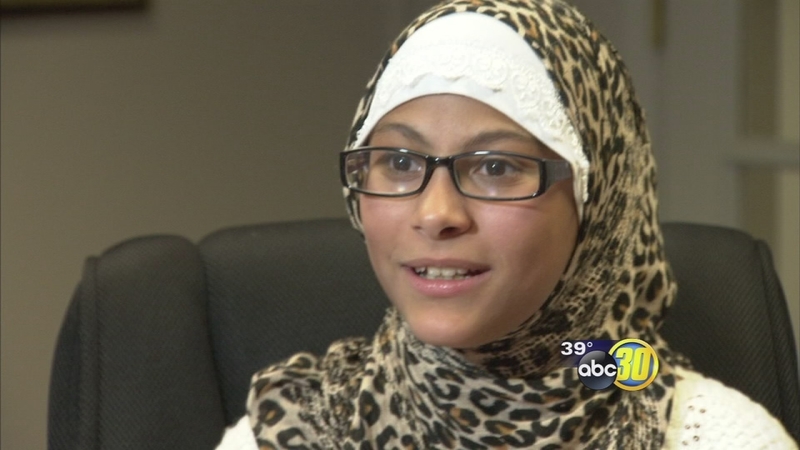 KINGSBURG, Calif. (KFSN) -- Ten-year-old Lulu Abdelfattah has the reading ability of an 11th grader. Besides being bright, she says she has lots of friends, and it's easy to understand why. "I've had a lot of people actually thank me for always being happy, because then they feel better," Abdelfattah said.

She's also Muslim, and proud of it.

She's attended Islamic school since she was four, where she is required to wear a hijab. Although hesitant, her parents finally convinced her to wear it at Ronald Reagan Elementary School in Kingsburg on Monday. It didn't go well, and not just because it didn't stay on right.

While she was adjusting it in the bathroom, Lulu says an adult told her she was taking too long and called her 'scarf girl.' While running during gym class later, her hijab fell off again, and she says her P.E. teacher noticed. "She yelled from across the field, 'Scarf girl hurry up, you either keep it on or you take it off, start running,'" she said.

Lulu said she said it again later on the basketball courts, and thinks dozens of other kids heard what was said.

In a statement, Kingsburg Elementary Charter School District Superintendent Dr. Wesley Sever said: "We have spoken with the parent regarding his concern. The district takes this matter very seriously and we will be conducting a thorough and impartial investigation. However, we cannot discuss the specifics of the investigation. Kingsburg Elementary Charter School District respects each student's individual right to freedom of religious practice. Staff members are sensitive to their obligation not to interfere with any student's religious practice."

Lulu says she's determined to fix the situation and make sure it doesn't happen again, to anyone, because those words are offensive. "Honestly I just hope that people consider what I'm saying right now and take it in so that they know that this shouldn't be happening but it is and it needs to stop," she said.

But she isn't going to stop wearing her hijab. Now that this has happened, she says she'll wear it everywhere she goes.

The family attorney said they are not looking for special treatment or a payday-- they just want what's best for their daughter.