KGO
By Michael Finney and Randall Yip
SACRAMENTO, Calif. -- Our sister station KGO-TV has learned exclusively that more charges in the Bay Area are likely to be filed in an unemployment benefits scam sweeping the country.

KGO-TV scoured court documents and talked with the San Mateo County District Attorney's office to get a clearer picture of what's going on. On top of that, two Bay Area residents say they were asked to take part in the crime. Both declined on-camera interviews, but they agreed to share what they learned.

A source, who asked to remain anonymous, said it was a get-rich-quick scheme filled with glitz and glamour. We're told some of the culprits allegedly spent their newfound fortune in Las Vegas, where people with large amounts of money blend in with everyone else.

Some of the truly unemployed say they've waited months without receiving their benefits.

According to a second source, people who she says fraudulently applied received their benefits in only one week.

This is how we are told the scheme worked:

It started with Person A, who hasn't been employed since having a baby two years ago. Still, she applied for EDD benefits and our source tells us she almost instantly received back benefits from EDD totaling $10,000.

Person A then offered to help Person B apply for his own benefits. The EDD promptly sent him benefits totaling $12,000.

Person B then turned over $2,500 of that money to Person A as payment.

Person A then did the same for Persons C and D.

But EDD put Person's C's claim on hold until it could ask additional question's about Person C's job history.

Person A made one phone call to EDD, someone actually answered, and the problem was fixed.

Yet hundreds of honest unemployed workers say they can't get anyone to answer the phone at EDD, or to even help them.

Assemblyperson Jim Patterson of Fresno fears someone working at EDD could be part of this scam.

"I'm not going to make the claim that the EDD is an inside job, but I'm getting close," he said.

As KGO-TV previously reported, some of those suspected of taking part in this scheme are in our prisons.

Eight suspects are accused of taking part in this scam while serving time at San Mateo County's Maguire Correctional Facility. Another is serving a 50-years-to-life sentence for murder at Corcoran State Prison. One is in San Francisco County jail, and another in California State Prison Sacramento.

The San Mateo County District Attorney's office in August charged those 11 inmates, and 10 others, with 17 counts of conspiracy to commit fraud.

We've since learned that three of the defendants have pleaded no contest and have received sentences ranging from 16 months to 4 years and eight months in state prison.

"The Sheriff's office completed an investigation which has found well over 100 other people who were involved in the fraud and another couple dozen who had received benefits," Gallagher said.

Those charges are expected to be filed soon.

Many of those charged listed their occupation as barber apprentices, an occupation Gallagher says the EDD did not verify.

"There was quite a rush and an impetus to get money into people's pockets. So there weren't a lot of safeguards put into place, and so EDD was not verifying employment," he said.

One of our anonymous sources tells us the scammer also obtained credit profiles on the black market.

Sometimes it's from a clerk at a hospital or another workplace where personal identifying information is required.

Applicants will apply for benefits using someone else's name and information. Once approved, our source say the applicant will put in a change of address making it harder for their fraud to be traced.

Unemployment benefits are still out of reach for many Californians who are out of work. While legitimate workers can't get benefits, officials say the EDD has paid at least $250,000 in benefits to inmates running a scam inside a San Mateo County jail.

"A useful address could be, you know, passed among inmates in county jail or a state prison as someplace where the benefit cards could be mailed to someone on the outside," said Gallagher.

KGOT-TV reached out to EDD, but it did not respond to the concerns raised in this story. They did send the following statement, stressing they are working diligently to separate the fraudulent claims from legitimate ones and getting benefits to the rightful people quickly.

"Scammers with extensive stolen information have been attacking benefit programs across the country, particularly the federal Pandemic Unemployment Assistance (PUA) program each state administers. Working with banking partner Bank of America in an aggressive effort to fight fraud, cases of an unusually high volume of claims associated with single addresses have been identified.

As a result, approximately 693,000 claims were temporarily suspended. The EDD's priority is to minimize any interruption for legitimate claimants who may be in the mix at these addresses as we weed out the fraudulent ones and shut them down. The latest developments include:

The EDD and Bank of America are coordinating additional review of the 377,500 debit cards associated with these claims that have been issued and payments received. The EDD is reviewing the other 315,000 claims that have not received a payment.

A number of methods continue to be used to expedite the validation of identities associated with these claims and ensure payments continue for legitimate claimants only.

Over the last several weeks, all of the claimants were sent emails and texts, along with notices in the mail asking for documentation to help EDD verify identity, encouraging them to submit those documents right away through our Document Upload option in UI Online.

To date, the EDD has received documents from 29,000 claimants associated with these claims. Resolution is expected on these in the next 5-7 days.

To ensure ample opportunity for response on all of the impacted claims, staff are following up with further emails, texts, and phone calls to try and reach claimants. However, due to the suspicious nature associated with these cases, it's quite possible that many identities will not be able to be verified, triggering notices of disqualification.

Moving forward, the EDD believes the implementation of our new ID.me identity verification technology which launched on Oct. 5 at the front end of our application process will allow us to more quickly authenticate legitimate claimants and help EDD process their claims faster. It will also mitigate such fraud activity from reoccurring in the future.

The EDD is very grateful for the public's partnership in fighting fraud and protecting the UI program for California workers in need.

You can learn more about fraud and how to report suspicious activity on the Fraud and Penalties: What you Need to Know page of the EDD website.
Report a correction or typo
Related topics:
californiaunemployment californiacoronaviruscoronavirus pandemicscamfraudunemploymentcovid 19 pandemiccovid 19
Copyright © 2020 KGO-TV. All Rights Reserved.
UNEMPLOYMENT CALIFORNIA
EDD mistakenly takes $10K from man's account Get your unemployment questions answered live by an expert 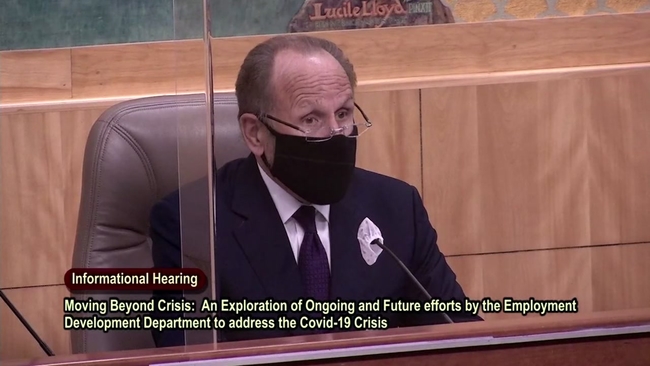