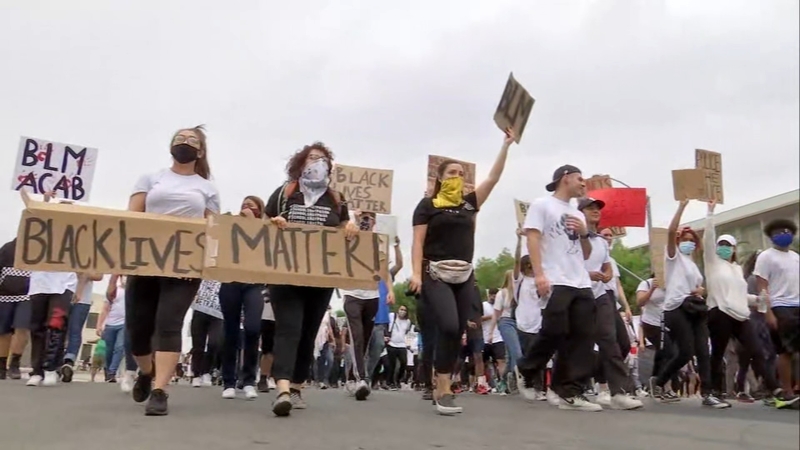 FRESNO, Calif. (KFSN) -- Ideas for reforming the Fresno Police Department are coming soon and we now know who will be suggesting them.

"There's no reason why this work can't produce what could be the best policing agency in all of America," said Oliver Baines, who will chair the Fresno Commission for Police Reform.

Leading up to the announcement, protesters turned downtown Fresno into a sea of people and opened eyes along the way, including some at City Hall.

"What we're doing today is because young people got together and said, 'We're tired of seeing the racial injustice that is happening in our community'," said Fresno City Council Member Esmeralda Soria.

Removing any bias and unnecessary violence is the goal.

The mayor-elect and former police chief says there's no room for bad cops making the grand majority of officers look bad. He thanked police for putting their lives on the line to protect people.

The 37-member commission, chaired by the former council member and former police officer Baines, is a diverse group racially and in perspective.

From the candidates to be the city's next police chief to public defenders to pastors and police watchdogs, it includes 17 African-Americans, 11 Latinx people, seven Caucasians, and two southeast Asians.

They're expecting uncomfortable conversations as they try to close a gap in trust between police and people in some Fresno communities.

And the commission isn't designed as a temporary fix to quiet protesters.

The aim is more permanent change.

"What happens oftentimes is there's a fire - sometimes figuratively, sometimes metaphorically - and then it gets put out and then we lose sight of the big goal and I don't want that to happen," said Council Member Luis Chavez.

The commission's meetings will be private, but the material they consider will mostly become public, including lists of police reforms that have worked for other agencies.

"We will be examining the philosophies of the department as it is now and measuring those philosophies against some of the best policing practices that occur in the country," said Baines.

The Fresno Police Officers Association is also part of the commission and their head tells Action News he won't be there to block reform. He wants to help make smart, meaningful change.