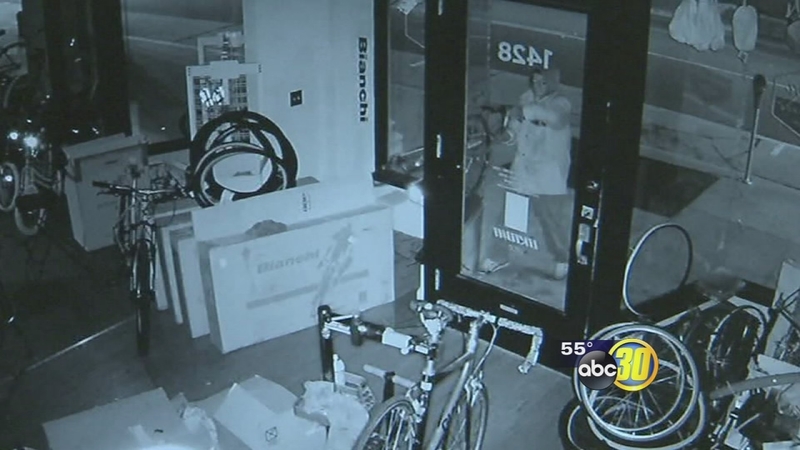 FRESNO, Calif. (KFSN) -- The owner of a local bicycle shop is cleaning up the mess left behind by a thief who broke into his store and stole an expensive bike.

The owner of Fulton Cycle Works in Downtown Fresno says bike stores across the Central Valley have become targets for thieves. This is the second time though in a little over two years that his store has been hit. "Bikes are a hot commodity for thieves right now all over town," store owner Darren Johnson said.

Surveillance video shows a man walk up to the cycle shop early Sunday. After eyeing a bike he seems to want, he goes to work to get it throwing an unknown object at the window, but when a couple throws failed to do the job the bike snatcher retires his hands and starts using his feet. "They just pulled the bike through the window and took off," Johnson said.

The store is now patched with plywood, and he says this is not the first time he has been a victim to this type of crime. "That time they did get away with about $8,000 worth of merchandise. Two bikes, one on each shoulder," Johnson said.

Johnson says the bike was a quality road bike that cost around $500. However, the biggest repair cost he says is the glass window that was shattered to pull it out. "The glass is probably a couple thousand dollars. Mostly this is cost me more insurance deductibles and higher rates and all the stuff that goes into getting broken into," Johnson explained.

Johnson's wife Caroline says her husband has worked hard to build this shop from the ground up, and she says break-ins like this make it difficult for him to stay motivated. "I hurt for him a lot because it's his passion," Caroline said. "When he got into this it wasn't because he was looking to make a buck, and if that was the case he'd be getting a paycheck and he's not it's something he's doing because he loves cycling and loves people."
Related topics:
fresno downtownburglaryfresno
Copyright © 2022 KFSN-TV. All Rights Reserved.
FRESNO
Fresno city manager Thomas Esqueda leaving position after 13 months
Mayor Dyer plans to add more officers to Fresno Police Department
Armed men rob 2 Fresno grocery stores within an hour, police say
Where to see holiday lights in Fresno and Clovis
TOP STORIES
Le Grand woman accused of killing children makes 1st court appearance
Mayor Jerry Dyer responds to One Fresno Foundation allegations
Omicron surge in Central CA continues despite slowdown in other areas
Deputies investigating series of armed robberies in Tulare County
Garbage truck goes up in flames in northeast Fresno
1 stabbed during altercation in central Fresno
39-year-old man shot in Visalia, police investigating
Show More
Supreme Court Justice Stephen Breyer to retire
Sierra Kings Health Care District celebrates 60 years of service
Good Sports: Homeschooled Valley soccer star to play at Pepperdine
North Valley nursing program offered to Atwater High School seniors
Fed plans to raise rates as soon as March to cool inflation
More TOP STORIES News