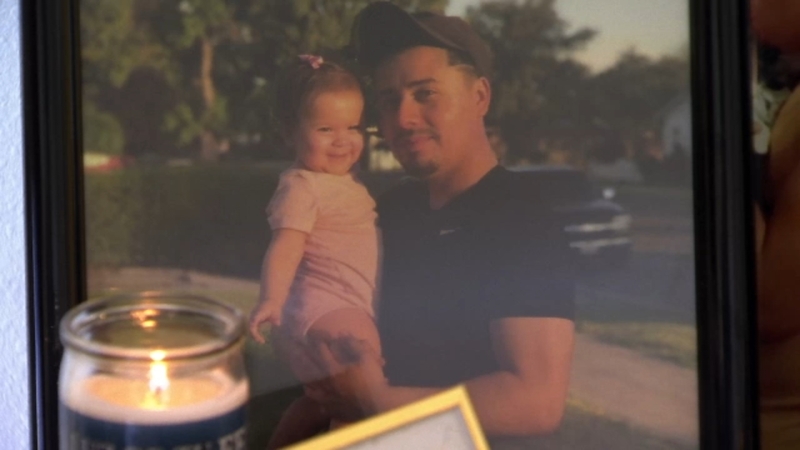 Fresno family mourns after losing loved one to hit-and-run

FRESNO, Calif. (KFSN) -- A Fresno man's sudden death just around the corner from his home has left his family in disbelief.

The heartbroken family placed a cross bearing Fernando Gaytan Jr.'s name near the candles that mark the spot where the 27-year-old brother, son, and father was tragically killed in a hit-and-run collision on Monday night.

"I just don't want to believe it's true, but it is," says his brother, Daniel Gaytan.

He saw his brother Monday morning at work, then again later in the day.

"I met him at the gas station and he asked for a Gatorade, I told him, 'I see you later'. Never thought it'd be the last time," says Daniel.

He says his brother was expected at their mother's house but family members soon heard a loud crash around 5 pm.

Police say Fernando was driving south on Pickford near Oleander when he was hit by someone in a black Mercedes. The suspect left the car, and also left the scene.

On Wednesday, Fresno police identified the driver as 43-year-old Ronnie White and issued a warrant for his arrest.

White is wanted for gross vehicular manslaughter, hit and run and reckless driving in connection to the crash

"I'm sure they'll get him, it's a matter of time. It'll bring closure to our family knowing he's caught," says Daniel.

Pictures in the family's living room shows the family the victim leaves behind - a wife, a 13-year-old stepson, and a two-year-old daughter named Bethany.

The family also has set up a crowdfunding website to help raise money for the victim's family that's already raised nearly $9,000.