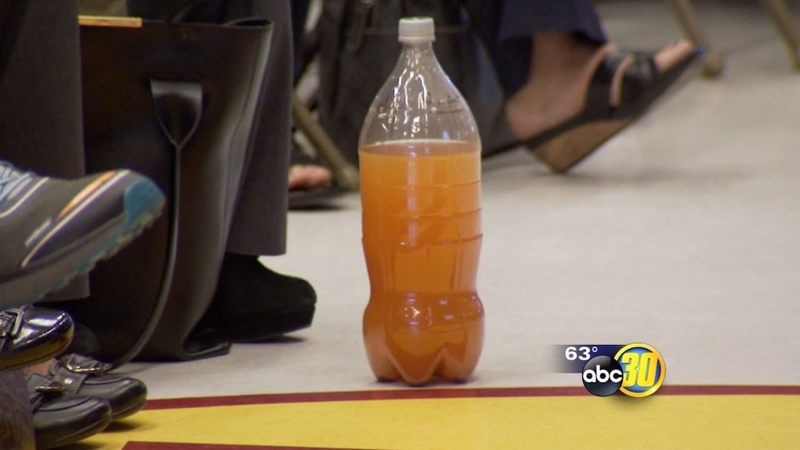 FRESNO, Calif. (KFSN) -- After a 90 day investigation on discolored water city leaders held a public meeting Tuesday night for Northeast Fresno residents. Getting to the root cause behind months of complaints about rusty water.

The problem seems to come from corroding galvanized pipes. The issue is that pipe has been, and continues to be, used in residential plumbing system.

One after one neighbors aired their concerns in front of city leaders. Many with their grievances in hand.

"I think if you knew you were drinking this in your water, you would be alarmed," said Bonnie Sisco, Northeast Fresno.

Since January, more than 200 homes in Northeast Fresno have reported discolored water in their homes. The city launched an investigation that is now in its third month. Those results revealed in a public meeting.

"All the city's water supply tests clean, all the way up until it gets to the house. So now, let's take the mystery inside the house and find out what's going on," said Mark Standriff, Director of Communications.

City leaders believe the problem lies in galvanized iron piping inside homes. The longer water sits, the more likely it is to create rust. Many of the pipes also don't have enough protective coating.

Thomas Esqueda, Director of Public Utilities, said, "None of the other pipes are meeting the thickness. The minimum you should have on it 2 oz's per square foot."

Officials said the permanent solution to the problem is to get new plumbing. A costly project that many neighbors immediately rebuked. They said builders and inspectors should have known the problems galvanized piping would cause down the road.

"You should pay $75 to flush my home, you should also replace the piping that the city approved through the builder," said one concerned neighbor.