Code enforcement takeover at Fresno mobile home will have to wait 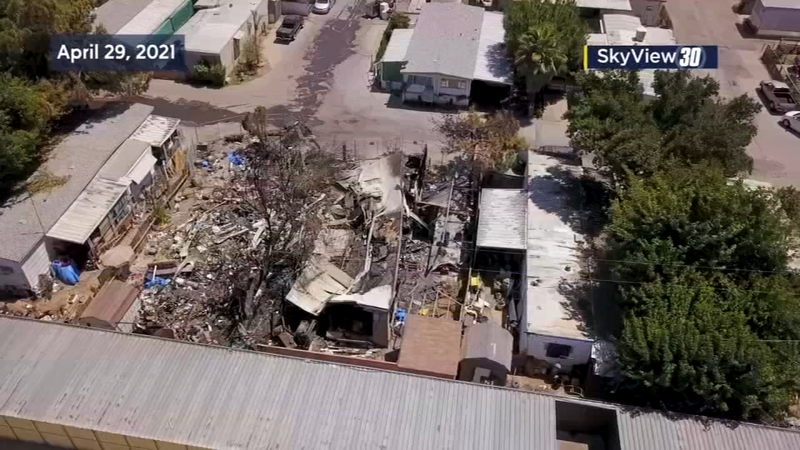 Code enforcement takeover at Fresno mobile home will have to wait

FRESNO, Calif. (KFSN) -- The City of Fresno is moving to take over code enforcement at a mobile home park where residents say they've seen death and disgusting sights.

But the city might've gotten a little ahead of itself.

But an early morning phone call forced them to change their plans.

Trash is piled up above the top of dumpsters and the charred shell of a home has not gotten cleared out since fire killed Ron Richardson two months ago.

This is what some residents described as a good day at Trails End Mobile Home Park.

"These conditions are unacceptable," said Fresno City Councilmember Garry Bredefeld. "The city of Fresno will never allow this kind of stuff to take place. The state has. And the state bears responsibility."

Bredefeld and Mayor Jerry Dyer have pushed for city code enforcement to take over from the state.

"We are going to take enforcement action," Dyer said. "We will take abatement action. And today is the beginning of that process."

RELATED: City of Fresno approved to take over responsibility of regulating mobile homes within city

The city planned to start enforcement and abatement operations Monday, but a call from the state department of Housing and Community Development forced them to hit the brakes.

"They have asked us essentially to stand down on enforcement and abatement," code enforcement supervisor Erica Camarena explained to the team.

Last week, the state told Action News it had already given the property owner a deadline of Saturday to fix nuisances and uncorrected violations. So a state inspector scheduled a re-inspection for Monday.

The city won't have enforcement and abatement powers until the state finishes.

A lot of the residents live in poverty and a team from California Rural Legal Assistance (CRLA) monitored the inspections to make sure they're not suffering as the city takes over.

"Not penalizing residents that aren't really part of the significant health and safety problem right now for minor concerns with their mobile homes," said Mariah Thompson, an attorney with CRLA.

Residents told us they're not sure what to expect with the change, but they're hopeful the city will push them to make improvements.

"I have a lot of things I need to clean up, which is only right," said Patsy Rajskup. "They need to get this place back to the 1990s when I bought in here. It was clean."

The city should be able to take over from the state by the end of this week.