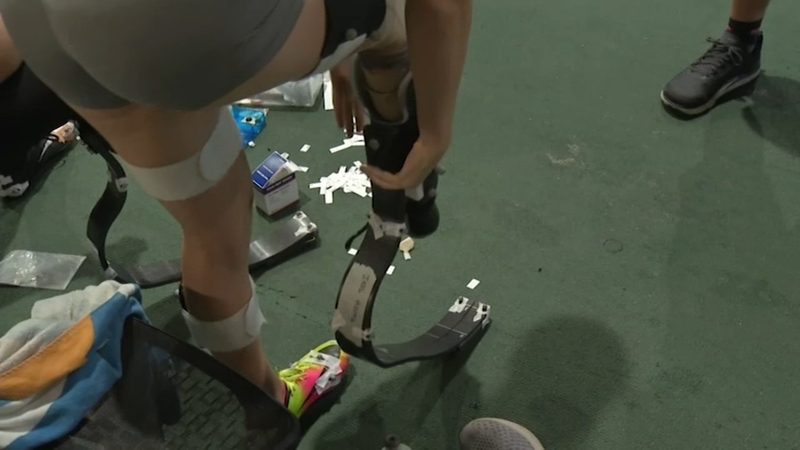 Heims said, "I had a little baby foot, but that was amputated when I was a year old."

Klein shared, "I had cancer when I was eight."

Grabowski is helping these amputees sprint onto the world stage.

Grabowski said, "We're at a place right now where athletes are very high caliber and they're working extremely hard to be able to compete at the highest levels and I'm hoping that we can start to keep up with them."

She is focused on optimizing a prosthetics stiffness, height, weight, shape: "How they move, how they walk, run, sprint, hop, jump," explained Grabowski.

Today, they're using cameras and sensors to measure how these sprinters move, track their force, and test these new carbon fiber blades.

Eric Kirby said, "By changing, enlarging this curve and adding the compound curvature here, that gives you more snap and response."

"I think something like that is going to work better around curves," said Grabowski.

Heims said, "I'm on a sprinting blade which when I jog on it, it feels different because it's thicker."

Kirby explained, "What we're seeing today is that this, by splitting the blade, it gives you more ground on ground contact."

World-class sprinter Blake Leeper, born without legs, is leading the way. He is being called the fastest human on earth and in Grabowski's lab was clocked at about 25 miles per hour.

And she believes this is just the beginning.

Giving young sprinters around the world a chance to compete against the best in the world.

"I don't feel like anything is holding me back. I feel like I can do whatever whenever I want," Klein said.

Heims shared, "That first day I felt like I could just run forever and never stop."

It's still to be decided if amputees like Blake Leeper will be allowed to run in the 2020 Olympics in Tokyo.

The International Association of Athletics Federations banned amputees from running against other runners after a German study concluded that blades allowed the runner to expend 25% less energy, even though researchers at Rice University concluded that was false, stating that blades put the runners at a disadvantage because they pushed off with less force than a biological limb would.